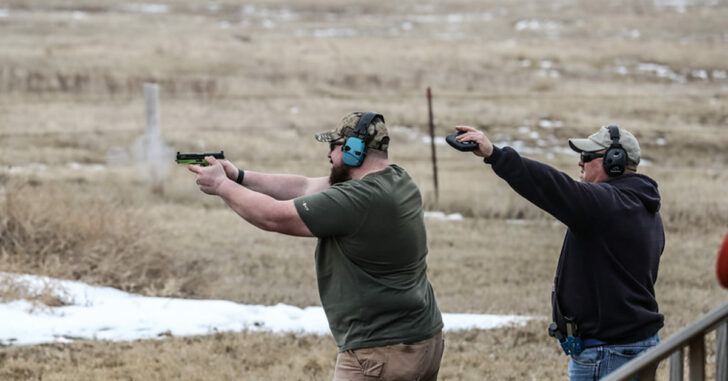 Whether it’s at a dinner party with friends or your next family gathering, you can guarantee someone is going to bring up firearms. They may be for them. They may be against. And if you’re smart, you can usually dodge those conversations altogether. However, sometimes it’s just not possible to sneak off.

For this article, we’ll give you three ‘popular’ claims against the argument that an individual has a right to carry concealed and give you a few bits of ammo to fire back.

Claim: Why Should An Untrained Civilian Be Allowed To Carry A Gun?

The easiest, low-hanging fruit is the attack on a person’s basic right to defend himself. This is a country that believed so heavily in the right to keep and bear arms that they enshrined it into the Second Amendment.

“Oh, but they were using muskets.”

They used muskets to defend their homes against violent, vicious people intent upon ending their lives.

The same concept applies now as it did then. When violence arrives on your door step or your work place or out in town, you can’t ignore it. While we strongly encourage people to regularly and continually pursue education in firearms, it ultimately comes down to the willingness of the individual to defend himself in that time and place.

Many state legislatures felt strongly that their citizens should take some mandatory form of training prior to becoming a concealed carrier. The statistics, however, have never firmly proven that a person is any less capable of successfully defending himself in a concealed carry defensive gun situation. This is not to say that training is not a very important component — and it should never be overlooked — but ultimately a person’s willingness to defend his life is a firm determiner of his success.

And, as we’ve seen all too many times, just because a police officer, soldier, or trained armed professional takes regular training in the use of his firearm, it doesn’t guarantee that mistakes can’t happen. They do.

You can always train for success, but you can never guarantee it.

That’s the point of training.

Most importantly, your average armed criminal is not going to care whether or not you have any training whatsoever when he tries to break into your house, your car, or hurt you. In those situations, I’d rather someone with no training at least have access to a firearm that could save his life than be restricted from doing so.

Claim: When Has A Concealed Carrier Ever Stopped A Crime?

The quick answer to this is “plenty of times”. We’ve reported about it here on a regular basis and have even written articles detailing notable events where a good guy with a gun stopped a bad guy.

Sadly, most of the evidence we have to support this argument is based upon anecdotal evidence because each situation is very unique and hard to fit into the narrow margins of statistics. There have been many attempts to find statistic to draw in the lawful use of handguns but

The CDC estimated that 33,000 people died as a result of gun-related injuries. Buried in the data, however, are a couple basic classifications: intentional harm, unintentional injury, and suicide. As an unintentional injury, firearms don’t even break into the top four causes. And, unfortunately, there’s no really good data reported as to how many armed civilians stop criminals every single year because the legal and/or medical definition of that term is hotly politicized.

The basic argument surrounding this claim revolves around conflating two separate things. Not everyone who owns a gun will ever use that gun against another person or animal. Most gun owners will never encounter a violent situation where a gun is necessary. So, the exposure of a gun owner to situations where he would need or be justified in the use of that firearm is low. The choice to carry that gun — and train with it — is a choice made out of the need for security.

So, conflating gun-related injuries and deaths with the usefulness of being prepared to handle bad situations is a bit of a stretch. And, for reference, the data collected by the CDC heavily leans towards an overall decrease in gun-related accidental injuries. I’m sure it’s because y’all have been reading all our Beginner’s series of articles.