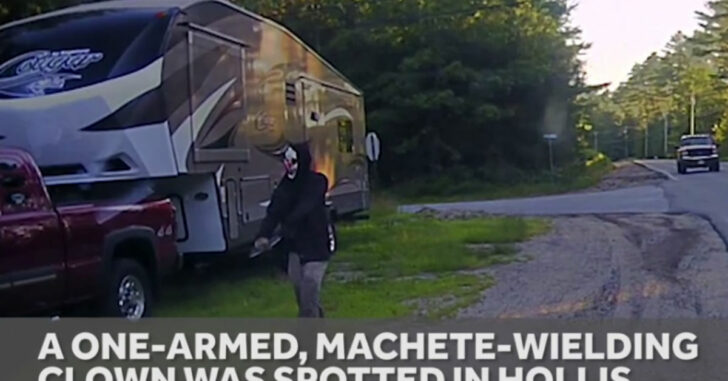 HOLLIS, MAINE — In the world of article titles that I ever thought I’d be writing, I can’t remember this one being on the list of possibilities.

A man is accused of drunkenly strolling down a Maine road wearing a black-hooded sweatshirt and a clown mask and brandishing a machete taped to where his arm had been amputated.

That man, 31-year-old Corey Berry, was arrested and charged with criminal threatening.

But what was he thinking? For starters, we know that Berry was intoxicated. And to finish it off, he was simply playing copycat.

He told officers that he was copying previous clown sightings as a prank.

For any trigger-happy people out there, this is not an incident where you would draw your firearm if you were walking down the street and happened upon Mr. Berry. Instead, calling the police from a safe distance is the correct call to make.

If Berry had started threatening people with the machete, or actively going after someone yourself… well, that’s a whole other story completely.

The point of this article? You never know what you could encounter in your day-to-day life. It could just be a clown with a machete… taped to his amputated arm.