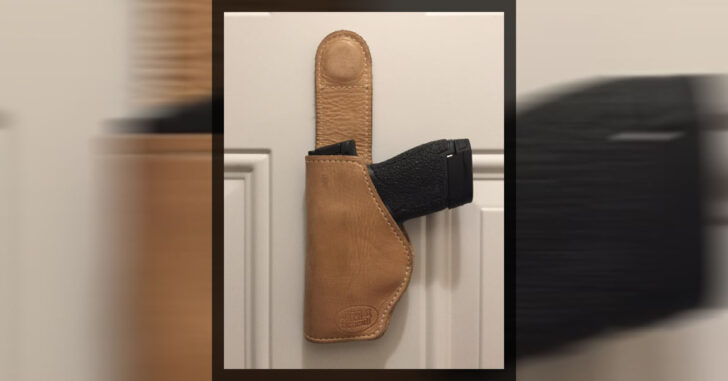 Any concealed carrier worth his salt knows — your concealed carry rig is only as good as the holster that keeps your defensive tool handy.

That’s why when I conceal my handgun, nine times out of ten it’s riding along in a QCC holster made by JM4 Tactical.

Folks, this sucker will ride with you all day long. You’re more likely to wear out than this thing.

Unlike the majority of holsters out there, this holster doesn’t rely on clips. Although there’s nothing wrong necessarily with clips, they are certainly more burdensome than the QCC system — a problem I didn’t even know I had until I was presented the solution.

The QCC uses some very strong magnets to keep your defensive tool of choice in place right where you want it.

One magnet is attached to the main body of the holster, while another is attached to a flap that goes over your belt line. When you want to carry, simply insert the holster inside your waistline and flip! the two magnets pull together and keep your stuff where it belongs. And that’s not all those magnets do.

The location of the magnets ensures that your firearm is not leaving the holster unless you want it to. Seriously, I have hung the thing upside down and shook it. Didn’t budge.

As far as comfortability goes, I will admit, it took me a little while to figure out where this holster was going to live the most comfortably. First, I tried small-of-back. It was totally fine for walking around, but when seated, it was not the most comfortable.

Appendix carry just isn’t my thing, but I have heard from several people that they enjoy the holster in that position.

I finally landed on 4 o’clock, and after about five minutes of fiddling, I got it to the point where I couldn’t feel it. Like, at all. I even went bowling carrying it that way, still nothing. And I bowled a 142, so, you know, good day.

I had the chance to talk with one of the heads of JM4 Tactical, Chad Myers of Abilene, Texas, and ask him a few things about his company.

The first question was easy. “So, why magnets?” I asked. The answer was simple. Chad is a dad of four, and both he and his wife are very active people. They found that constantly rigging and unrigging a standard concealed carry holster was too much of a hassle for them, and they wanted something different.

“Nobody wants to be doing that all day,” Chad said.

Parents and students out there know perhaps better than most — you really have to plan out your day when it comes to concealed carry — you wonder into the wrong area and you’re in a mess of trouble. All day carry is often impossible.

So Chad got this idea staring at a money clip — he thought “why can’t I do this with a holster?”

And that’s exactly what he did. After experimenting with different materials, he ended up using fine-quality leather as that was the only material strong enough to make sustain the abuse of magnets strong enough to retain a firearm.

In the end, he developed a lightweight (just under 4 oz, according to Chad), affordable holster that was so convenient that it could be slapped on any piece of clothing in a matter of seconds and stay there.

There are multiple videos on the company’s Facebook page showing the gun staying snug on athletic wear. The company’s reputation continues to grow — after one year of business, they have sold approximately 40,000 QCC holsters alone.

The company also produces a carry belt and a tuckable holster which, since I haven’t tested them, I will leave out of this story. Suffice it to say that if they match the workmanship of the QCC, I have no doubt these products will do just fine in the competitive marketplace.

One of the reasons they have done so well is their outstanding customer service. It’s just a family-run business, and it feels that way.

Point of fact, just a couple of days after I called for an interview, Chad called me back just to see how I was doing. They’re those kind of folks.

So, what happens if you buy a product and you don’t like it?

Well, they’ll work with you.

“We try to accommodate our customers, even if they return them. We’re not a corporation,” said Chad.

That’s the kind of promise you can make when you have complete confidence in your product.

As Chad says, “We’re always working on something… we are always looking at trying to do something different.” This is a business to keep an eye on down the line as they continue to innovate.

You can check out their current lineup here. Give it a look!

Previous article: Child Shoots Self After Accessing Firearm In Purse: Why We're Responsible Next article: The Best Self-Defense Ammo, Voted by You, and One Takes Home 45% of the Vote