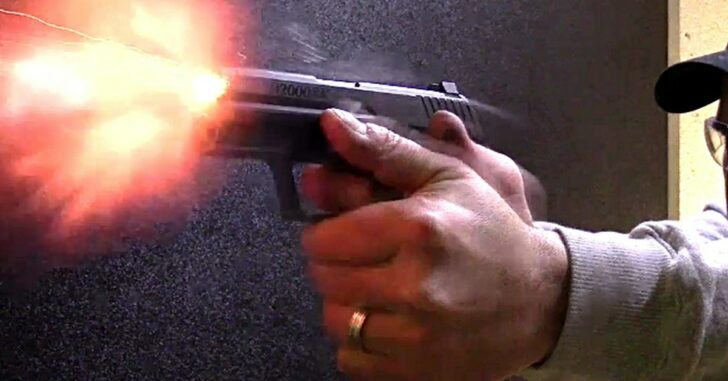 When we look at the qualities that many guys are looking for in a concealed carry handgun, four things stand out. They look for a quality company with a long standing reputation, decent magazine capacity, a subcompact model with nice ergonomics that is comfortable to carry and a smooth trigger. The HK P2000sk embodies all of these qualities.

Heckler and Koch is a quality company that enjoys a fine reputation for producing many of the most refined and reliable guns in the market. The HK P2000sk is the smallest and lightest handgun they offer. We are looking at a beautiful sub compact model with a variety of trigger pull variations that many guys are proud to call their CCW gun. The P2000sk featured today is chambered in .40 s&w and has an average price around $700. It has an LEM (law enforcement modification) trigger system that suits this gun well. The LEM trigger is a double action trigger pull that is very smooth. HK offers the LEM trigger on all of their handgun models however I have seen it mostly on the P2000sk. The LEM reset is very short which allows the shooter to perform amazingly quick double taps
and follow up shots. I find the triggers on HK handguns to have the smoothest and quickest action in the market. The P2000sk offers a two finger grip with interchangeable backstraps. It has light stippling and finger grooves. The HK P30sk (another HK subcompact model) has more aggressive texturing and various grip panels that can be changed to fit different hand sizes. The P2000sk may offer fewer grip option choices however the feel of the grip and firm hold of the gun fits my hand perfectly.

The HK handgun models feature quality double stack magazines with sight holes for the loaded rounds. They offer extended base plates which allow for a full three finger grip however the model featured has a shorter flush base plate for a two finger grip. The P2000sk magazine in .40 S&W holds nine rounds and the 9mm model holds 10 rounds. The controls on the P2000sk are ambidextrous which is nice for left handed shooters. The magazine release lever is under the trigger guard which many people call the, “European Style.” I have learned this style well with my full size HK P2000 and HK P30. I have found that with some practice and range time, the system works well and is quite simple to learn. The slide release is a two inch bar that sits parallel to the slide on both sides of the gun. The two inch bar is much different than a small lever slide release found on most handguns mainly because it is easier to release the slide from a locked position.

HK handguns are extremely refined and that is most noticed on the slide. The cuts and lines on the slide look amazing as it mates with the polymer frame for a perfect fit. The rear serrations are standard as charging the gun takes little effort due to the light dual recoil spring. Even press checks are simple with the absence of front serrations.
The sights on the P2000sk are a three dot format which work well however the gun featured has trijicon night sights installed. Due to the expense of this gun, I feel the additional investment in night sights is a nice improvement for the full CCW package. To disassemble the P2000sk require no tools and the process is quite simple. Once assuring the gun is unloaded with the magazine removed, the slide will need to be pulled back about a half inch to align a cut out in the slide to the slide release lever. While holding this position simply push the slide release button on the opposite side to release the lever and pull it out. At this point, the slide can be removed from the frame without pulling the trigger. By removing the dual recoil spring and the 3.26” match grade barrel, the gun is completely field stripped. To reassemble, simply perform the same steps in reverse order. Overall, the HK P2000sk is an excellent handgun. The features mentioned along with the shooting reliability and accuracy makes this gun a great CCW choice. The recoil of the .40 S&W round was easily managed with the light LEM trigger and smooth action that is consistent with HK handguns. Having been an owner of HK handguns for quite a while, I find this P2000sk shares the same refined quality in a smaller package. For those who are not afraid to spend a few extra bucks for a top quality handgun to carry, the HK P2000sk may be for you.