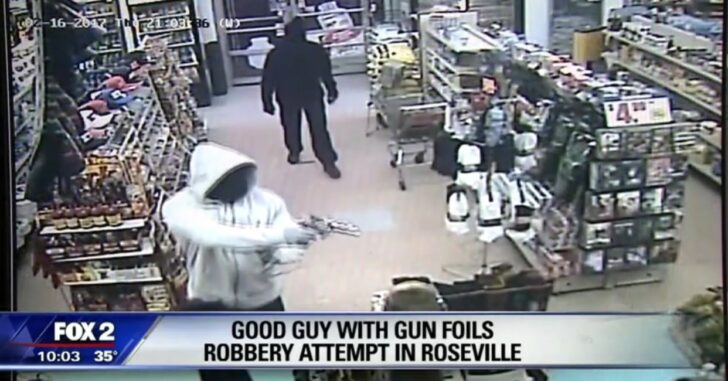 ROSEVILLE, MICHIGAN — A liquor store owner was behind the counter with his friend when two armed men with masks came in Thursday evening and announced a robbery. Although with masks and guns, they didn’t need to do anymore announcing.

One of the armed thugs hops over the counter, but he doesn’t make it far until he’s seen high-tailing it the other way. Why the sudden directional change? The store owner’s friend, who was also behind the counter, was armed and ready to fire. Three shots when off, all in the direction of the bad guy.

Long story short, he wasn’t sticking around to see how accurate the armed citizen was.

The store owner, John, told reporters of the events and believes that one of the suspects was hit.

John was also armed and drew his firearm as well, but the thugs were already headed out the door and decided that his firing of shots would not be safe.

Both men are legal gun owners with permits, and I’m under the impression that both thugs… aren’t.

The suspects have not been found, but the suspect in the white hoodie is believed to have been shot in the face. Maybe, if he has any brains in his head, he’ll make his way to a hospital where he can be picked up by police and sent off to jail where he belongs.

Previous article: Constitutional Carry: The Three Best Arguments In Favor Next article: Woman Shoots And Kills One Of Two Robbers Who Broke Into Her Apartment