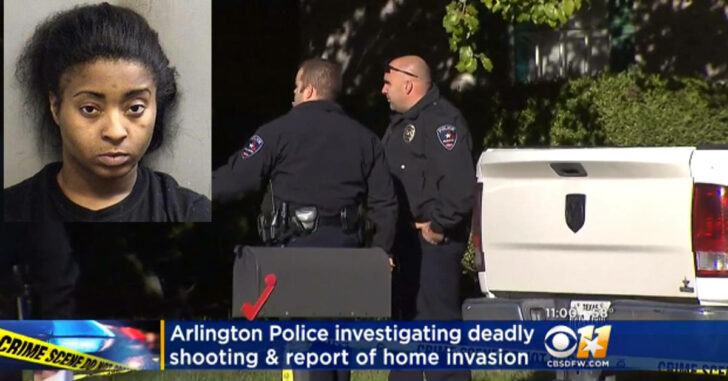 ARLINGTON, TEXAS — A woman lead two armed men to a couple’s house. Inside, they found a man with a gun who refused to be a victim. Tell us again why owning a firearm is a bad thing?

According to Arlington Police statements released through CBS Dallas-Ft. Worth, Jasmine Piggee, 23, lead two men to a house with the intention to commit violent burglary of the household and its occupants. As the two men started breaking down the front door, one of the occupants retrieved a gun and fired upon both of them. The first intruder was shot and killed and the second one was critically shot in the face.

Ms. Piggee was captured and the attempted home burglary is allegedly the result of some sort of argument that took place the day before. Apparently, she must have thought bringing two armed men to another person’s home and breaking down the door would have settled that disagreement. She was right. However, the result was surely not what she expected.

What we’re dealing with is a vile human being who willingly convinced two other men to arm up and violently break into another person’s home while both occupants were still inside. Arlington Police briefly detained the man of the house, as he is believed to be the one who shot both of the intruders. After briefly being detained, he was released and no charges have been filed pending a formal investigation by a Tarrant County Grand Jury.

As we’ve seen in previous cases involving self-defense, that investigation may take as long as five or more months to conclude. It will be a tough length of time to wait until an ultimate determination is made but the alternative of doing nothing and waiting for two armed, angry men to enter his home with the intention of harm is anything but acceptable.

This is why we make the choice to stay armed. It’s a choice of protecting ourselves and those we love or waiting for the mercy of those who would seek us harm. The police will invariably form their own conclusions about this case, but the law-abiding gun owner will surely conclude: it’s better to be armed and not need it than to need it and not be armed.