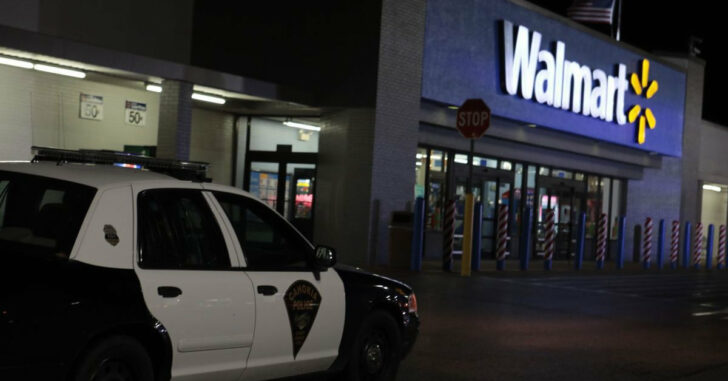 CAHOKIA, ILLINOIS — When an off-duty police officer spotted a wanted, violent fugitive entering a Walmart, he knew he would need backup. He likely didn’t anticipate how badly he was correct… Or how his off-duty concealed carry handgun would inevitably save his life.

According to the Southern Illinoisian, the off-duty officer called police. When they arrived on the scene, the perpetrator attempted to flee. In the ensuing attempt to escape, he hit a concrete pillar with his vehicle. Several more vehicles were hit, including the police cruisers. Both on-duty officers were injured in the commotion. The fugitive, identified as 35-year-old Jason Stringer of Centerville, then careened his vehicle directly towards the off-duty officer who ratted him out. That officer, thankfully, had a concealed handgun.

Of the several shots he fired at the oncoming vehicle, he was able to get a single hit before dodging the oncoming car. That shot, as it turned out, probably saved his life. The vehicle made it for some distance further before Stringer collapsed at the driver’s seat and collided with oncoming traffic and a traffic median strip about a mile away.

Stringer was pronounced dead at the scene. And, according to records obtained by the Southern Illinoisian, Stringer wasn’t on the run for failure to pay a speeding ticket. He was a wanted felon who was charged with possession of a firearm as a felon and for violently threatening his ex-girlfriend’s new boyfriend. On one occasion, he fired at least two rounds at the man and on a second incident, held the gun to the man’s head.

Stringer was going to take someone out. Thankfully, he took himself out. But not before injuring several officers and nearly killing the off-duty officer who was fast enough to tag him.

There are violent people out in this world. These people do not care who they hurt so long as they get what they want. From his description, Stringer appeared to be a very violent man intent on harming others. He did a lot of damage before being brought down. If he hadn’t been caught, he’d likely do quite a bit more. His death is certainly nothing to mourn but it’s the actions of an off-duty officer with a gun that happened to be the author of the end of it.

What we can learn from this incident is two things: a.) the only way to combat a violent man is to have a good guy with a gun who’s willing to use it to defend himself and others. B.) you can’t use a gun you don’t have on you.

If that off-duty officer visited that exact same Walmart at the exact same time, reported in what he saw, and waited for the on-duty police to do all the work — he would have been dead wrong. Thankfully, he knew enough to keep a gun on him at all times.

As a law abiding, responsible concealed carrier, you should do the same. Always attempt to contact authorities as soon as possible, definitely be a good witness and help them out when dealing with violent people, but realize, ultimately, you’re on the hook for your own safety. Be responsible. Carry every single day, everywhere you legally can.

Previous article: Two Burglaries, One Night -- Two Very Different Results. Are You Ready To Keep A Firearm Yet? Next article: Home Intruder Learns Too Late That Occupants Of California Home Are Armed