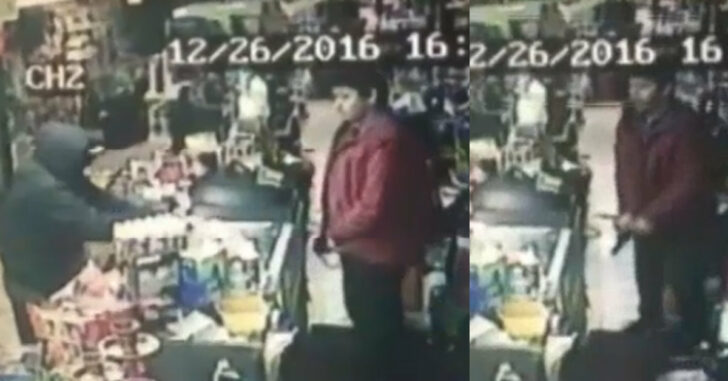 PHILADELPHIA, PENNSYLVANIA — A seventeen-year-old convenience store clerk was able to get a gun away from an armed robber and get the robber to leave. Surveillance store footage shows the robber putting a bag on the counter alongside a gun and demanding the clerk fill it. The clerk grabbed the bag and swung it and the gun onto his side of the counter.

Once the gun was in the hands of the clerk, the robber dropped the act.

According to surveillance footage shared with NBC Philadelphia, the clerk did not pursue the robber as he left the store. He stood his ground, called police, and waited for them to arrive.

The robber did get away but the clerk was safe — and he didn’t pursue the suspect.

“I snatched the gun from him, took it and aimed it at him,” the clerk said. “That’s when he took his mask off and everything and put his hands up. He’s like, ‘Stop. Stop. Stop.’”

The store is owned by his family and it’s pretty clear he takes that responsibility seriously. Owning a convenience store anywhere can be a daunting task. Stores such as this one are often targeted for armed robbery. Very little cash ever comes out of them but it’s considered a fast grab situation.

When the armed robber clearly lost control of the situation, he was smart enough to walk away.

And it just goes to show that a gun in capable hands, at any reasonable age, is not the threat. A gun can be a danger in the wrong hands — and there are plenty of criminals who are living testament to that.

We’ve covered a lot of convenience store robberies where it was either an armed clerk or a customer who came to the rescue. In this case, the clerk wasn’t armed but he still handled himself very well.

Hopefully, if anything, this may reinforce the need for a gun to be present in the store. Violent crime can and will happen. It only makes sense to be prepared. But the core of preparedness is situational awareness and knowing how to take advantage of a bad hand dealt.