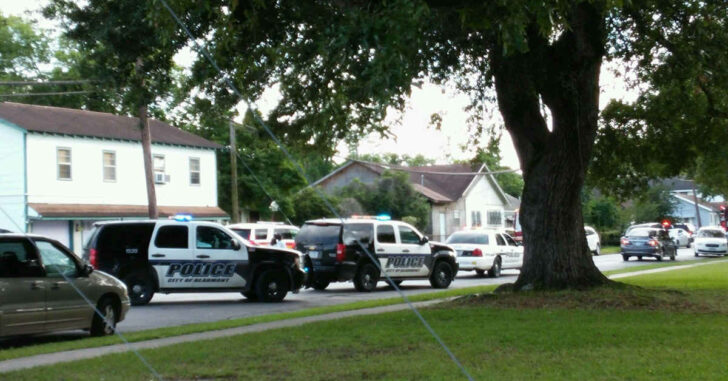 BEAUMONT, TEXAS — Beaumont police arrived at an apartment complex after a 911 call had been placed by a man alleging to be the victim of an attempted armed robbery. When they arrived, they discovered an armed man on the ground with multiple gunshot wounds to his upper torso. The intended victim told police he was walking out to his car when a man approached him and held him at gunpoint. He was able to retrieve his own handgun and successfully shoot the armed robber.

According to Beaumont’s ABC 12 News, the alleged robber was transported to a nearby hospital in serious but non-life-threatening condition. He is expected to recover. This case is still under investigation by Beaumont police and they confiscated the guns from both the victim and the alleged criminal.

SIDENOTE: Remember, folks, if you get your gun taken from you by police over the course of an investigation, remember to get receipt of that gun so you can get it back. If your gun has not been used in a crime, it’s usually taken under civil forfeiture. You should be given a receipt and be able to collect it after the investigation is concluded. If you want to learn more about civil forfeiture and guns, read our article about it here. Also, make sure to talk to an attorney to find out more about what options are available to you.

The police are not forced to take the victim’s word over the word of the alleged assailant. Without the benefit of some corroborating evidence, many police officers will opt to investigate to ensure they have the full story. In many cases we’ve seen, the police generally side with the defender so long as there’s no legitimate reason to believe otherwise.

In this particular incident, however, the alleged robber got to the location by use of a stolen vehicle from nearby Westlake, Louisiana. This shows that he’s obviously not above breaking the law and committing multiple felony offenses for the potential of robbing another man.

The details boil down to this: always maintain situational awareness and always carry your gun with you.

A gun can’t help you if it’s not there or isn’t loaded. Imagine trying to pull your gun from your holster and having to second guess whether or not a round is in the chamber. Even worse, imagine if you already have a gun pointed at you and now you’re forced to draw, load a road, and put shots on target. Milliseconds matter in these situations. A gun has to be on you, loaded with a round in the chamber, in order for it to be effective in saving your life in a situation where a gun is already aimed at you.

Be careful out there, folks. Criminals are waiting for any excuse to pounce and they don’t have to question whether or not what they’re doing is right. We do.