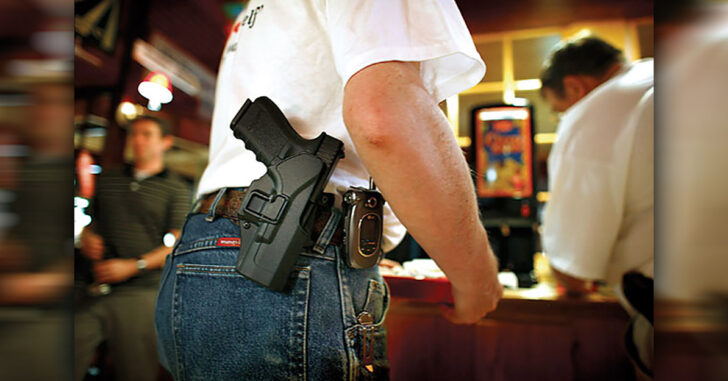 The other day, I was in the grocery store shopping with my husband, and he tapped me on the shoulder and motioned with a glance to, “look left.” There was a guy with a 1911 slung to his belt inside a pretty unsturdy-looking nylon holster. Neither of us was particularly phased by the notion that someone was carrying, especially since we both were too, and likely, a good portion of the patrons in the building were, as well. I wasn’t even bothered that he was carrying openly. It’s his right to do it. But I kept wondering, Why? My state is one of the friendliest states to obtain a concealed carry permit, and in my county that is especially true. Our sheriff encourages exercising our Second Amendment rights. We work in conjunction with him to train new permit holders, though it is not required.

What are reasons for carrying openly? Well, in many states, until very recently, a permit was very difficult to obtain, and open carry was the only legal means to exercise your right. Most states in the country were ‘may issue’ or ‘no issue’ at all. One of our local news channels did a story about open carry. It actually seemed like a pretty fair piece to be frank. They followed a few guys carrying pretty big rigs on their belts in a diner and at the mall. They did the usual man-on-the-street questions like “how did seeing men with guns make you feel?” Answers ranged from “it doesn’t bother me,” to “what is this guy trying to prove?”

Then you can go on YouTube and find countless videos of people carrying openly with the sole purpose of catching a police officer’s interaction with them on camera, hoping that they have a negative interaction with the officer. To be fair, there truly ARE videos of people who are legally carrying their firearm as prescribed by the Second Amendment who clearly do get, what I would call harassed, in a less-than-lawful manner by officers who are playing fast and loose with the law. Those incidents appear to be more rare than not, however. Most LEO’s I know actually WANT citizens to learn how to carry.

When you see a man walking down a street with an AR-15 slung over his back while recording himself doing it on his phone, why is he doing it? He knows full well, that it looks odd to people in the neighborhood. He also knows someone will call the police, and his hope is that the encounter will lead to a ton of hits on his YouTube channel. But what does this kind of display really accomplish? Are we winning hearts and minds of those who are on the fence about our Second Amendment by these displays? Or, are we simply giving anti-gunners the ammo they need to turn public opinion against lawful gun ownership?

Most of us who subscribe to Concealed Nation do so because we have a common interest in preserving our God-given right to keep and bear arms. Does making a public spectacle of yourself help the cause? If you’re carrying openly simply to get a rise out of people, then you miss the point. The founding fathers wrote this Amendment into our Constitution so to ensure each American has the ability protect himself/herself from harm, whether it be from criminals or from tyranny. I believe in a person’s right to open carry within the bounds of the law set forth by the Founders, but just because you can, doesn’t always mean you should.

Previous article: Two New Gun Control Videos Were Released This Week And We're Trying To Determine Which One Is The Worst Next article: Victim's Son Shoots Home Invader And Holds Him At Gunpoint