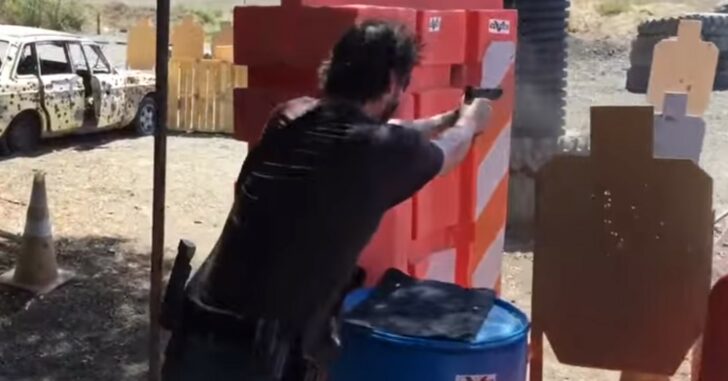 He’s a pro, no? The dedication and training that Reeves shows is incredible, and this is one pro-gun Hollywood star that we enjoy watching on and off the range.

Taran Tactical Innovations, a gun store in California, has shared a video of Keanu Reeves tackling a gun range with a whole mess of weapons. John Wick: Chapter 2 has finished its principal photography and will be coming to theaters in February 2017. It looks like Keanue Reeves’s picked up a thing or two while training for his character. Racing through a course, Reeves used multiple guns quickly to fire off multiple rounds. Keanu Reeves Learns Jiu-Jitsu and Judo for ‘John Wick’. keanu reeves gun range and gun training.

Keanue Reeves takes his training seriously. According to producers of the first John Wick installment, he practiced five days a week, eight hours a day, for four months with firearms, martial arts, and driving. It makes sense that he’d be learning gunplay from pro shooter Taran Butler. Butler has trained actors (and actresses) on his 20-acre range for big movies like Charlie’s Angels, Transformers, and Avatar.

If you can believe it, they’re going to put even MORE action in the sequel. Keanue Reeves told IGN, “If the first one was a black belt, then this one is third degree black belt.” Clearly, Reeves is ready to light up another Wick. Keanu shredding with Taran Butler, keanu reves shooting, Keanu Reeves firearm training.