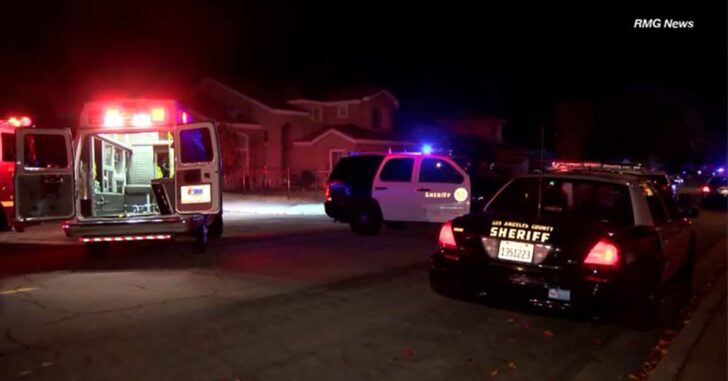 On New Years Eve, a 54-year-old father shot and killed three people, and then his own son shot and killed him in what has yet to be ruled self-defense. It’s a story that is truly disturbing, and one that the DA is currently deciding the next move.

Two men, ages 54 and 27; and two women, 48 and 54; were all found suffering from gunshot wounds and were pronounced dead at the scene. A semi-automatic handgun was also recovered.

The 54-year-old man had fatally shot his son’s bedridden mother, girlfriend and friend, Lt. John Corina told the Los Angeles Times. The motive behind the initial shooting was being investigated.

After the father shot his victims, his son began to fight and wrestle with him, ultimately gaining control over the firearm. Then, he fired a single shot at his father, killing him.

After the incident, the son, identified as Christopher Morey, called police to report what had happened. Morey was then arrested for killing his father.

“We’ll see what the D.A. wants to do,” [Lt. John] Corina told the newspaper. “We’re going to book him for what he did — he killed another human being. The district attorney will decide if it was justified.”

The motive behind the initial shooting by the father is still being investigated.

While it’s too soon to make any conclusions based on the information we have, it would seem that Morey was acting in self-defense. We’ll be keeping an eye on this story, so watch this space for updates.

Previous article: How Many Guns Does Your State Have? A Look At The Numbers, Plus Comparisons To Other Countries Next article: Beginner's Shooting Posture Versus Experienced -- We All Look Awkward Starting Off, But What Have We Learned Since?