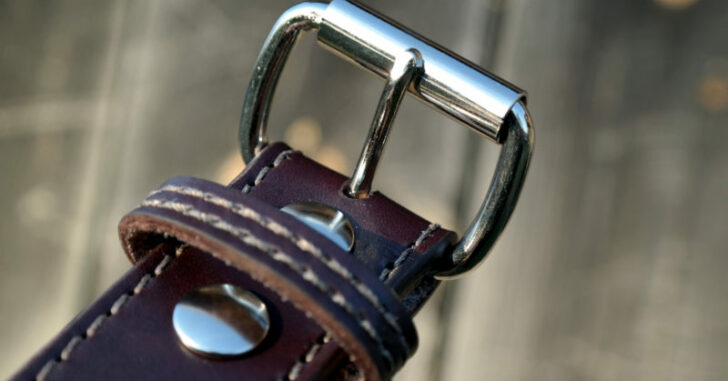 Four weeks ago, I received one of Bigfoot Gun Belt’s first Bigfoot 14 oz. English bridle leather, steel-reinforced core gun belts.  We’ve seen a lot of gun belts so every time a new one comes in, there’s a certain amount of apprehension.

“What else does this thing bring to the party?”

It’d be easier to run down the list of what it does.

The Bigfoot gun belt is made from two strips of very well crafted 14 oz. English bridle leather.  In the middle is a strip of spring-coil steel.  Stitching the whole enchilada together is military grade Tex 270 thread.  To even it all off, there’s a nickel-backed roller on the buckle to help the wearer slide into the right size notch.

Yes.  For reference, here’s the Bigfoot gun belt next to a 30 year old English bridle leather saddle hanging up in the barn.  Note the distinct similarities in texture, contour, craftsmanship, and thickness. The second big feature is the spring steel core.  On the surface, this may seem a bit overkill but after reviewing Lenwood Holster’s hybrid belt, I began to see the reason why reinforced cores were so essential.

They keep the belt straight no matter how long it’s worn.

Plenty will ask, “who cares?”

Anyone who doesn’t want to deal with gun belt sag or simply wants to be able to pick up a box on the ground without worrying about a pistol grip sliding out into plain view.

In the long-term, it means a belt that will be with the concealed carrier for the long run.  Not bad for a $59.88 MSRP.

Okay, not good enough?  We didn’t think so, either.  That’s why I took my Bigfoot gun belt and put it up against a variety of extreme conditions that no one would reasonably expect a belt to survive.

Looks can be deceiving.  Everyone talks a big game but the only way to truly know whether or not a product can stand up to a litany of abuse is by… Yep, you guessed it — abusing the heck out of it.

It would have been potentially dangerous to hit this belt with a rotary saw due to the steel core inside.  The steel core hadn’t been tested for its integrity, yet, so I figured I’d start by putting a beating on the leather with a good ole fashioned jigsaw.  Taking a saw I’ve used to cut through planks plenty of times, I took the blade to this double-ply 14 oz. English bridle leather. After sawing on it for about half a minute, I saw that the first layer of leather hadn’t even been worn down to the steel core.  I’ve since inferred that if someone ever tries to throw this thing into a wood chipper — that wood chipper better come with a “no questions asked” warranty.

It seems counterintuitive to use a soldering iron against leather.  After all, the leather is just going to burn and deform, right?  Right.  That’s why we also decided to use it against the military-spec thread and also do tests to see how long each section of belt takes to resist. Going after the thread, first, it took a while to melt a hole all the way through the thread and into the leather.  If people were expecting this military grade Tex 270 to give up on the first round — they’re going to be in for a surprise.  The thread held up surprisingly long.  And after one link was destroyed, it didn’t immediately begin to unravel like it would with lesser quality stitching.  This shows the reinforced sturdiness in the smaller details of this belt.

And, obviously, the steel core doesn’t melt at normal combustion temperatures.  The soldering iron was altogether ineffective against it.

Did I say steel cores don’t melt at normal combustion temperatures?  I don’t believe it.  Let’s throw it in a furnace at 724.6°F.

Cheap leather will burn up and smell awful.  Thick, hardened, and well treated leather will also smell terrible but it won’t scorch off even at higher temperatures.  Taking the temperature with an IR probe, I discovered one section of coals was upwards of 726ºF (average).  Let’s see how that nickle-plated buckle and belt end do. It took maybe about 3 minutes of being presented to those temperatures before combustion kicked off.  As expected, the steel buckle, when heated, burned its own way out of the leather.  The leather split neatly into two separate sections and showed off a layer of adhesive that also held them to the steel core.

As for the spring steel core, it was altogether unphased by the blistering hot temperatures.  After being put back in to the hot coals for another 5 minutes, the steel turned a cherry red but did not warp or deform as expected. Rated out of 5, with 3 being an industry standard.

Overall: 4.7/5.0 (A); The Bigfoot Gun Belt with 14 oz. English Bridle Leather and Spring Steel Core is a viable long-term concealed carry belt that can withstand the most brutal conditions.