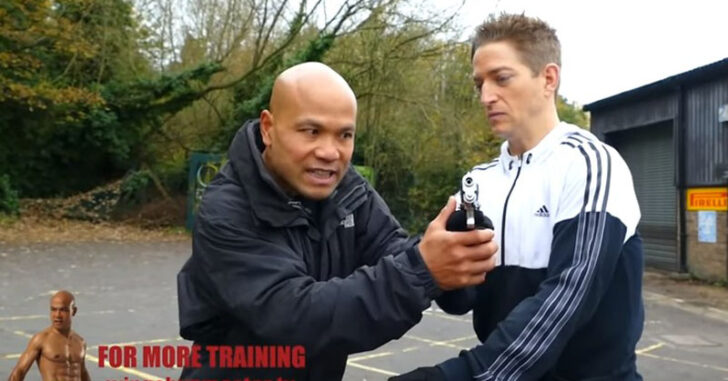 In this video – as in all of these disarm videos – the bad guy holds the gun steady, well within the good guy’s reach. In this situation, even someone who hasn’t studied under Wing Chun Tai Chi JKD Master Wong has a pretty good chance of stopping the bad guy from shooting him – provided they apply the recommended speed, surprise and violence of action. A skilled, determined good guy might even be able to take away the bad guy’s gun and use it against him. Problem: unless the defender incapacitates his antagonist and/or high-tails it out of there (always a good strategy), he willface a vicious counterattack. That said, the biggest problem anyone in this scenario faces is . . .

The bad guy isn’t likely to be standing still. He probably won’t be alone. He/they will probably come out of nowhere – or from various angles – and whack you in the head, first. And then whack you some more. And then take you money. Then again, they might not want your money. They may want to hurt you, kill you, kidnap you, rape you or all of the above.

Face it: the days of the polite mugger – as seen on TV! – are gone. (If they ever existed.) Anyone evil enough to rob you is A) smart enough not to get too close unless they’re going to knife, shoot, kick the crap out of you or beat you to death and B) evil enough to kick the crap out of you, shoot you, stab you, beat you to death or rape you – just because.

In short, if “it” happens, it could be really messy.

If someone’s holding a gun against you, if you missed the chance to escape or evade, the first thing to keep in mind: you don’t have to counterattack. If you can’t counterattack, if the bad guy or guys are too numerous or too far away, if you’re physically or mentally unable to be violent, if you can’t get to your gun, surrender your valuables and hope for the best. No regrets.

If you are going to mount a non-gun defense – which must take the form of a violent counterattack – there’s one rule to follow: go all-in. Use everything you’ve got all at once: kick, punch, head butt, elbow, scratch, gouge, anything and everything. Simply put, go for the kill. Maximum damage in the minimum amount of time.

Sure, it’s great to have hand skills, a plan/technique of some sort and enough sense to move the gun so that it’s pointed in a safe direction. Knowing how and where to strike is vital information. But the real world is not a dojo.

Notice that the scenario assumes a single attacker. Again, not likely. Will the bad guy’s friends stand around and watch you attack their cohort? They will not. What then? Hell if I know. But the more of them there are, the worse it’s going to be. And it’s going to be bad.

I know! Use your gun! And carry it in such a way that you can remove it from concealment as fast as humanly possible. “I’m just going to get my wallet.” Get your gun and shoot the bastard. Which bastard? Boarding house rules: everyone gets firsts before anyone gets seconds.

For God’s sake, move! Don’t stand there and shoot the bad guy(s). Move and shoot. Shoot and move. Shoot while you’re moving. Where to? Anywhere. Even a couple of steps to the side could save your life. Move to cover or concealment? If you can. Run like hell? Yes please! Remember: a bad guy shot through the heart still has time to kill you or your fellow friendlies dead before he dies.

A firearm is your best defense against a firearm but – you may have to use physical violence before you can get to your gun. That sucks but not as much as not having a gun to get to. As for these disarm videos, as silly as this one is, it’s one of the best. If you have half of Master Wong’s animus when you attack someone holding a gun to you, you’re on the right track. Good luck with that. You’re going to need it.