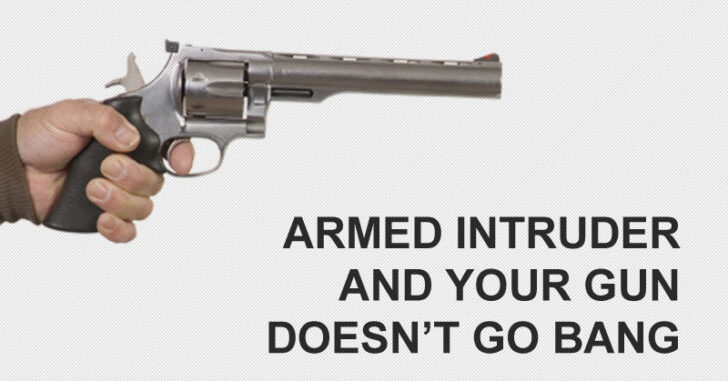 SEQUOYAH COUNTY, OKLAHOMA — 40-year-old Billy Winstead has had his concealed carry permit for some time, but never expected to ever use his firearm to defend himself and his family. That all changed one night last week, but it didn’t come without a huge hiccup.

It was late at night and Winstead awoke to his dogs barking, so he got up and grabbed his .22 revolver to go check things out at his front door.

“I honestly thought it was an opossum or something getting into the dog’s food, but when I opened the door there was a black male in a black hoodie and dark jeans, standing about three to five feet in front of my door with a pistol,” he said.

That’s when Winstead made the decision to raise his firearm and pull the trigger. (*Note, this article is not meant to go over his decision to fire on someone outside of this home, as this action will stir up a debate. We are simply looking at what happened when he pulled the trigger.)

However when the trigger was all the way back, all Winstead heard was a click. No boom. His ammunition had failed him in a moment where he felt threatened.

“The safety was off but I found out later on that it was faulty ammunition,” he said.  “It has since been replaced.”

Luckily for Winstead, it seems that the man outside made note of his presence at the door and decided that he’d rather run for his life vs go head-to-head with an armed homeowner.

I don’t know what ammo he was using, but it seems that all of the rounds were defective (at least that’s what I gathered from his statement).

In any event, no-bang trigger pulls do happen in real life. If that were to ever happen to you in a situation like this, what’s your backup plan? You have one… right?