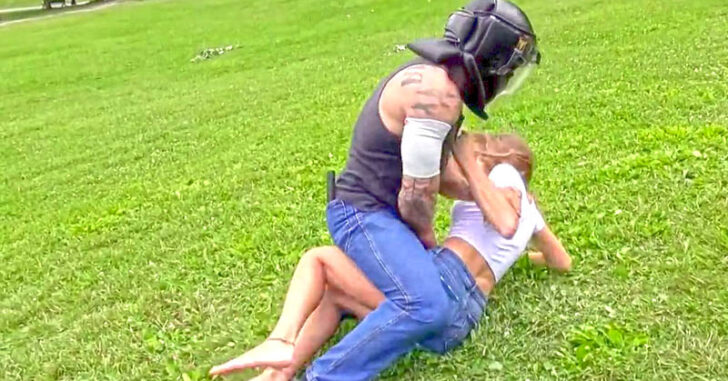 Ready or not, bad things happen to good people on a daily basis. You’re more prepared than most, in the fact that you carry a firearm. But what happens if that firearm were to become compromised?

What if it gets taken from you?

What if it jams?

What if you drop it?

Are you prepared to physically defend yourself against the bad guy?

If you’re not trained in hand-to-hand combat, what can you do and what makes sense? Realistically in a situation like this, you do anything and everything you can to stop the threat for long enough to get away. Go for the eyes and dig right into them. Go for the groin. Nothing is a cheap shot when your life is in danger.

You put your crazy eyes on and you fight with every ounce of strength you can muster.

In the above video, self-defense instructor Nick Drossos seemilgly finds a random woman on a college campus (or park?) and asks her if she thinks that she’d be able to get away from someone attacking her.

We asked her what she would do if a male attacker’s objective was to grab her against her will and bring her to a secluded area wanting to harm her. She said that one of her first instincts would be to scream if someone grabbed her. It’s true, you would probably scream if someone attempted to harm you. Screaming is good, since it creates attention and someone could hear you and come to help you. Another instinct of Catiana was to hit her attacker in the face or any other part of the body, to escape.

While this video and demonstration is geared toward a female requiring self-defense, it can be used for anyone in a few different situations.

Included is a demonstration of things to do if you happen to find yourself pinned to the ground, which puts you in a very compromised situation.

But, let’s say your attacker has managed to mount you and pin you to the ground, how can you escape? If he’s pinned you down and is putting pressure on your hands, you can perform a buck and roll and get him off of you. Once he’s off, you can strike him to incapacitate him. You can strike him with your palm, your elbow and your fist. You can even try eye-gouging him, crushing his throat or hitting his groin.

If he has pinned you down and starts reaching for your pants, you can strike him once he has left one of your arms free. As you strike him, perform a buck and roll to get him off of you. Afterwards, start defending yourself by striking him using palm strikes and elbows. You can go as far as grabbing his hair and smashing his head against the ground, or even biting him somewhere on his face.

It’s true; you do what you have to in order to get away. You fight hard and you fight dirty.

With all of this in mind, do you train to remove yourself from a compromised position? Do you train to defend yourself with your hands –or anything else you may have access to (except your firearm)? Do you know how to find –and what to do with– vulnerable areas of your attacker’s body?

How would you fair against an attacker in this manner?

Previous article: [VIDEO] Gun Lube Cold Test: CLP vs. Froglube vs. FireCLEAN and more! Next article: Two Women Hold An Elderly Man Hostage -- Until He Gets Free And Gets His Gun