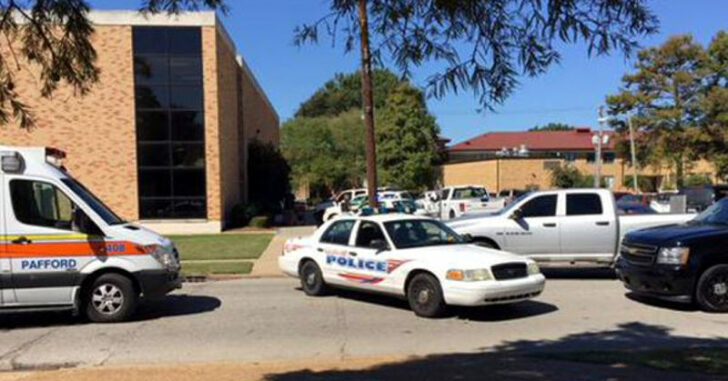 **UPDATE 6 2:41 PM EST: Dr. Shannon Lamb, 45, is believed to have shot his wife and called police at 10:20 am.  Police are actively searching for this man.  He was employed by Delta State University. (WMC Action 5)

**UPDATE 4: 2:30 PM EST: WMC Action News reports that Cleveland police have announced that the shooter is not believed to be a student attending the university.  Campus remains on lockdown.  No classes will resume.  University is closed. **UPDATE 3: 2:20 PM EST: WMC Action News is reporting that Mississippi Highway Patrol believes the shooter has left the campus.  Shooter is believed to be at-large.

**UPDATE 2: 2:05 PM EST: KTBS and RT are both reporting that the Mississippi Highway Patrol has confirmed that the shooter has taken hostages.

**UPDATE 1: 2:00 PM EST: Fox News reports that Bolivar County Deputy Coroner Ted Ray has been informed that the identity of the slain professor is Prof. Ethan Schmidt.  Prof. Schmidt was an assistant professor of history.

CLEVELAND, MISSISSIPPI — ABC News is reporting a campus lockdown on Delta State University following the shooting death of a professor in Jobe Hall.  The lockdown was initiated at approximately 10:45 am Central Time.  University officials have ordered faculty and students to take shelter and remain in place until the all-clear has been announced.

The man who is believed to be the shooter is still at-large according to the Mississippi Department of Public Safety.

One professor, Bill Hays, reported that the university did a notably poor job in communicating the active shooter to the rest of the school but as Dr. Don Allan Mitchell told ABC, “Fortunately for us, our public safety officers and university officials have trained many of us for active shooter situations.”

KSVN notes the shooting came right before the university prepared to celebrate its 90th anniversary.

Previous article: After Court Victory, FSU And USF Fans With Permits Can Take Firearms To Games... But No Further Than The Parking Lot Next article: Do You Carry At Home? Why It's ALWAYS A Good Idea...