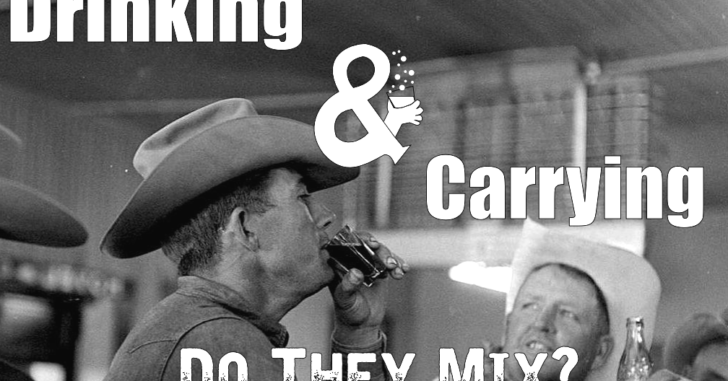 It’s been a long hard week.  Why not just pop over to your local bar and have a nice cool glass of suds?

On the surface, it seems like an awesome idea.  But if you’re a daily carrier – it’s walking a thin line.  Every state that issues a concealed carry permit has their own specific limitations of what you can/cannot do with a concealed gun.  For almost all states, though, that includes strictly prohibiting those who carry from drinking at all.

For example, in Michigan, any amount of detectable alcohol via a breathalyzer, urinalysis, or blood sample will result in civil forfeiture of that pistol, a misdemeanor offense, and revocation of that CCW permit for a year. A concealed carry permit can be permanently revoked if a concealed carrier has a BAC of over .10.

Civil forfeiture is a very real thing.  In the example of Washington State laws,

1) The superior courts and the courts of limited jurisdiction of the state may order forfeiture of a firearm which is proven to be: …

And the worst place to be caught? Getting pulled over.  Just at the legal driving limit of .08?  That’s a double whammy.

Outside of the civil forfeiture, the rest makes sense. When there’s the possibility for impaired judgement, people tend to get wary of another person’s competency to engage with lethal force.

Gun in the Glovebox?  Maybe Not.

For many states, if the concealed carrier plans on drinking, he must have his firearm in a secure container in his vehicle – out of reach.  While the legal debates proceed about whether or not a glovebox or center console constitutes a secure container, that’s a ruling that will only be determined in the courts.  The point is to stay out of lengthy, expensive criminal and civil court cases (unless you’re an attorney – in which case, have at it). A good rule of thumb is locking up your concealed carry gun in the trunk – preferably in a locked case.  This keeps you straight out of any legal quandaries with having a firearm in the vehicle with you.

Even if you have a designated driver – which you should – you still can be knocked for having the gun in an accessible place around you.

How to Drink and Be Safe

When you went out to the bar prior to being a concealed carrier, you likely had a designated driver.  Having a friend who you trust to remain competent throughout the course of the evening while you steadily lose yours is important.  Well, the same deal can apply in going out with a Designated Shooter.

NOTE:  Some states have specific provisions disallowing concealed carry handguns in drinking establishments that aren’t classified as “restaurants”.  Make sure to know what your state’s call is.

If you’re able to have a designated buddy – who is a concealed carrier – out with you and your pals, then it’s the added security at least one of you has his wits about him enough to legally use a firearm if the need arises.

It’s the little middle grounds in situations that make being a daily carrier all the more important.  Sure, before settling down to a nice cold brew – you have to hang up your guns.  Just like Ernie once said in Sesame Street, “if you want to play with the rubber ducky, you have to put away the saxophone.”

Thankfully, there are ways to still stay safe and have fun.  Take a designated CCW buddy next time you go out for a cold one.

What are your views on impaired judgement and CCW?  Tell us about it in the comments section.