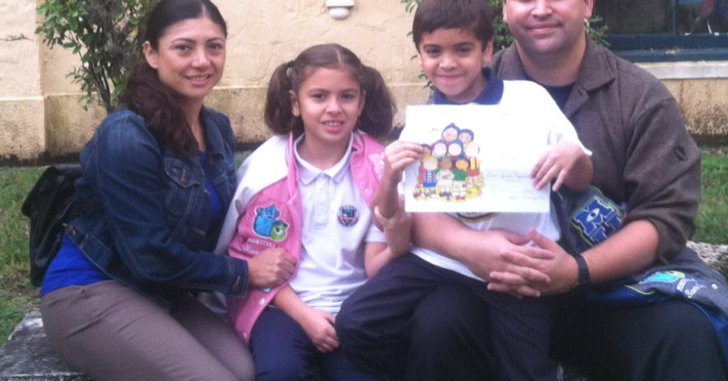 Daniel Oliva has never been in trouble.

The 34-year-old, married father of two works as a court bailiff for

He’s assigned to the domestic violence section. It’s a uniformed but non-sworn and unarmed position. There are police liaison officers assigned to the courthouse in case an armed response becomes necessary.

Oliva obtained his concealed-carry license three years ago, but he only carries his Glock 19 when he’s off duty.

“After working here in the courthouse and seeing so many people getting arrested for violent crimes, I felt the need to defend myself and my family,” Oliva told me Wednesday. “As a bailiff, I always get associated with the judges’ decisions. These people remember my face, but I can’t remember all of theirs.”

Tuesday afternoon around 3 p.m., Oliva and his wife were driving in their 2008 Toyota Prius to pick up their seven-year-old son from school, when he was stopped by a Coral Gables Police officer.

The officer told Oliva he had stopped him for driving 26 mph in a 15 mph zone, which Oliva disputes.

As he was getting his driver’s license out, the officer noticed Oliva’s concealed-carry license in his wallet.

“He asked me if I had a concealed weapon in the car — he stopped abruptly,” Oliva said. “I got a really bad vibe about how he was handling this. Before I could get my concealed-carry license out, he ordered me to put my hands on the dash and lean forward.”

The officer demanded to know where Oliva was carrying the pistol. He told him it was in a belly band on his right side. The officer reached in, under his shirt and seized the weapon.

He removed the magazine and ejected a round from the chamber, which Oliva said is probably still laying in the street near the school.

“He took my handgun back to his car and ran it,” Oliva said. “When he came back I saw he had completely disassembled the weapon. He ordered me to pop my trunk.”

The officer, Oliva said,  dumped the gun parts into his trunk, and then pushed the rounds out of his magazine, one-by-one, into the trunk.

He then issued Oliva a written warning for speeding, and for not having a current insurance card.

Oliva and his wife were very scared throughout the encounter.

“He had a very tense — very tense — attitude,” Oliva said. “I don’t know what crime he suspected me of committing, but I didn’t want to confront him, especially in Miami-Dade. I probably didn’t say three words to him the whole time. We, my wife and I, were very sensitive not to disrespect him.

“It’s horrible that a person who lawfully wants to protect their family is treated like a criminal,” Oliva said. “Especially that he did this in front of the school, in front of other parents in line to pick up their children. I don’t know if other parents may now associate my vehicle with that of a potential school shooter.”

The officer, Oliva said, aggravated what should have been a very routine traffic stop.

“I feel my rights were violated,” he said.

Marion Hammer, executive director of the Unified Sportsmen of Florida and past-president of the National Rifle Association, agrees.

“I believe this incident involves an illegal search — without provocation — of a law abiding citizen duly licensed to carry a concealed weapon,” Hammer said Wednesday.

“He saw the concealed firearms license, which led him to a heightened sense to know the driver was armed,” Hudak said. “Could there have been a more polite way to handle it? I would be more than happy to refer this to IA, and they would do an investigation from top to bottom before it comes to my level.”

The police chief said his officer was well within his rights and department policy.

“The way you have described it to me is that the officer by seeing the card, he would have the right to ask if there’s a weapon in the car,” Hudak said. “The other side of the coin is, if he leaves him in the car with a gun, is that ultimately optimum safety for the police officer? I believe the officer-survival skill is that he asks for the gun. The card is reasonable suspicion that a person inside the car may be armed, at which point the officer stays alive by the way he handled it.  Based on the way you presented it to me, based on the officer seeing it in the wallet. It’s not a bad search.”

Eric Friday, of Fletcher & Phillips, is the general counsel and lead attorney for Florida Carry, Inc. He too has issues with the constitutionality of the search.

Surprisingly, Friday was not surprised by Oliva’s allegations.

“This is not the first time I’ve heard this story– right down to every round out of the mag, disassembling the gun, and throwing it into the trunk,” Friday said. “Given the significant history of  concealed-carry licensees as law-abiding citizens, they should be considered just as trustworthy as any police officer during a traffic stop.”

Friday reiterated that no driver in Florida has a duty to tell police when they are armed.

“Because of repeated instances such as you are describing to me, I no longer recommend that to people today,” Friday said. “I changed my position because of misconduct such as this. There used to be a mutual trust between law enforcement and most concealed-carriers, but police actions in recent years have done a lot to harm that history of mutual trust.”

Friday said police need more training on how to conduct themselves when they encounter legally armed citizens.

“We have a fundamental lack of trust now, and it cannot end well,” he said. “We have numerous examples of concealed-carriers who have stepped up and saved law enforcement when they’re in trouble. But I am not aware of any concealed-carrier who has had to rely on a police officer to save them from a suspect.”

In my opinion, training is always an option, but I strongly believe it’s time for the legislature to create specific penalties that apply when the rights of concealed-carry licensees are abused, or this will continue unabated.

Our preemption statute was continually abused by local governments until the legislature created specific penalties. The lawmakers added teeth to the law — fines that must be paid personally by any public official who decides to tinker and create their own gun laws.

The same type of legal teeth need to be added to the statutes that protect the rights of concealed carriers.