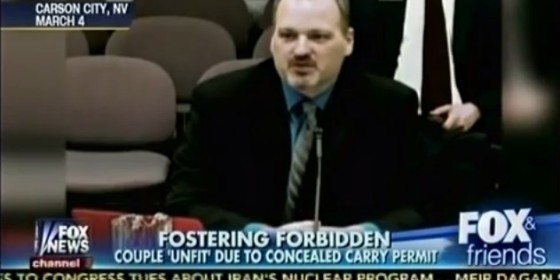 CARSON CITY, NEVADA — A married couple that has been together for 24 years wants to foster two 12-year-old siblings, but have been denied. Brian and Valerie Wilson want nothing more than to foster the siblings, but the State of Nevada says they can’t. The reason: they have concealed carry permits.

Brian Wilson spoke to the Nevada State Assembly during a hearing in attempts to get a variance from a state regulation prohibiting the carrying of loaded weapons with foster children was denied:

My wife Valerie and I have been together since high school, 24 years now I believe now we’re at. We have always planned early on that we would adopt later in life. In 2013, we decided it was now time to adopt and complete our family. There’s a lot of older children in the system that need homes. We have siblings, we have 12-year-olds that… let’s be honest, it’s a sad truth, there’s not as many people lining up to take those kids and give them a good home. Fortunately, we were in a position to do that.

The state regulation says that firearms and ammunition need to be stored separately and in secure containers in homes that have foster children. Since they carry firearms, this automatically disqualifies them from becoming foster parents.

The Deputy Administrator of Child & Family services, Jill Marando, had this to say in the report:

A concern about the ability of a child to gain access to a loaded weapon.

The Fox News anchor made a brilliant comment at the end of the above video, and I couldn’t have said it better myself:

It’s just… that’s nonsense. If you have a concealed carry permit, you’ve already demonstrated responsibility and the fact that you’re a law-abiding person. They just don’t like guns. They’re letting their left-wing politics interfere with this family’s desire to adopt.