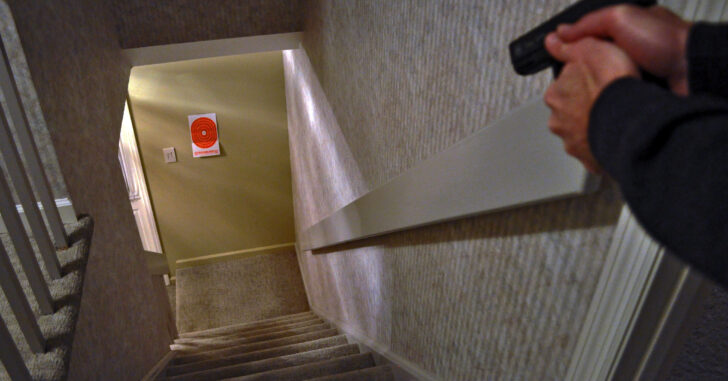 As many of you have already figured out, we don’t just cover concealed carry. We often post articles of a good guy successfully stopping a bad guy. Many of the stories offer teachable moments that we like to cover under a ‘what if’ scenario. It’s great to think these things through.

Many of the stories cover home invasions. The first thing that someone usually tells reporters is “It happened so fast.” So, staying in this light, would you be prepared if someone came through your front door in a split second while you’re on your couch watching TV?

This is where a few home invasion drills may come in handy.

We all know our homes, but do we really know them? If someone were coming up your stairs and you were in your bedroom, do you know –before you need to know– where the best place for cover is? Or, if you’re sitting on your couch and a pair of thugs comes through your front door, are you safer taking cover behind that couch, or is it better to get behind the wall because you know there’s a massive steel safe on the other side of it?

Take this other scenario as an example; you’re upstairs when an intruder breaks into your home. If your stairs are curved and you don’t have a straight shot to the bottom, do you know where you’d take cover and also be able to see if anyone starts to walk up? And if your stairs are straight, do you practice dry-firing at a downward angel at your imaginary target (or real target, as seen in the top photo)? The dynamics can change with variances such as these, and it’s always good to practice.

If you have kids that you’ve taught to use firearms, it’s important to include them in any drills as well. I remember reading a story on this exact topic where a father shared the story a home invasion that they unfortunately had to go through. A man had entered their home and trapped his 12-year-old son in a room. The son had a Ruger 10/22 with numerous rounds, but he only pulled the trigger once. During their drills, they only went “BANG” once to stop the bad guy.

So, the son only pulled the trigger once. Then a second or two later, he realized that he had other rounds that he could fire as well. By that time, though, the bad guy had luckily begun moving in the other direction.

Remember to play through as many scenarios as you can possibly think of. What do you do if the bad guy is coming toward you and you fire, but miss? What happens if he is now within arms reach? What happens if your firearm jams? Where is the safest place that you can get to until you resolve the issue?

These are all things to think about, along with many others, and acting them out now may someday help you win the fight. Your home is unique; take the time to go through different scenarios in the environment you know. Remember that with many home invasions, you have the upper hand — if you are prepared.

Previous article: Woman's Current Boyfriend Shoots And Kills Her Ex-Boyfriend After He Breaks Into Their Home With A Gun Next article: NYC Gunman Who Killed Two Officers Warned Followers On Instagram