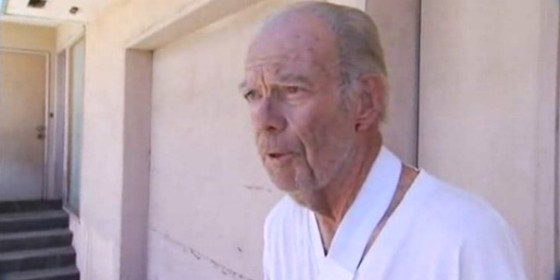 Tom Greer says that he has no regrets after shooting 28-year-old Andrea Miller, after she allegedly burglarized Greer’s home with another person, Gus Adams, 28.

The question to charge Greer with a crime comes up after a video was posted by a news channel that conducted an interview with Greer after the incident. In the video, Greer said a few things that could possibly be used against him.

“The lady didn’t run as fast as the man, so I shot her in the back twice,” Greer told KNBC-TV. “She says, ‘Don’t shoot me! I’m pregnant, I’m going to have a baby!’ and I shot her anyway.”

“When the time comes to defend yourself, you best do something,” Greer, his arm in a sling from the confrontation with the burglars, told KNBC.

The 80-year-old returned home Tuesday night to find Adams and Miller rifling through his home. They tackled and body slammed him to the ground as they tried to break into Greer’s safe.

Today after an autopsy, it was determined that Miller was not actually pregnant.

During this confrontation, Greer’s collar bone was broken. When they were caught off guard, Greer grabbed his revolver and fired two shots at Miller while she was running away.

Adams faces murder charges, since his accomplice died while he was committing a felony.

Do you think that Greer acted in self defense? Do you feel he should be charged with any crime? Was it justified for him to shoot while the robbers were running away? Share your thoughts in the Facebook comments section below.