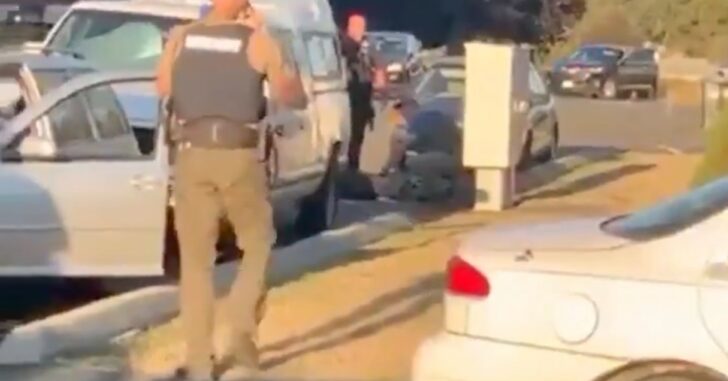 If you thought the situation in Portland was bad already, it’s about to get a lot worse. Following the killing of Aaron “Jay” Danielson after a pro-Trump rally rolled through the city on August 29, an avowed Antifa supporter, Michael Forest Reinoehl, was identified as the prime suspect. In a Vice.com interview published yesterday, Reinoehl appeared to confess to the shooting, claiming that he shot Danielson in self-defense after Danielson pulled a knife.

“You know, lots of lawyers suggest that I shouldn’t even be saying anything, but I feel it’s important that the world at least gets a little bit of what’s really going on,” Reinoehl said. “I had no choice. I mean, I, I had a choice. I could have sat there and watched them kill a friend of mine of color. But I wasn’t going to do that.”

Yesterday afternoon, federal authorities located Reinoehl in Lacy, Washington. As they tried to arrest him under a warrant issued yesterday, Reinoehl was shot and killed when, they say, he pulled a gun.

**WARNING: Some may find footage disturbing**

The man, Michael Forest Reinoehl, 48, was killed as a federal task force attempted to apprehend him in Lacey, Washington, about 120 miles (193 kilometers) north of Portland. Reinoehl was the prime suspect in the killing of 39-year-old Aaron “Jay” Danielson, who was shot in the chest Saturday night, a senior Justice Department official told The Associated Press.

Federal agents from the FBI and the U.S. Marshals Service had located Reinoehl on Thursday after a warrant was issued for his arrest. During the encounter, Reinoehl was shot by a law enforcement officer who was working on the federal task force, the official said. The official could not discuss the matter publicly and spoke to the AP on condition of anonymity.

The official said Reinoehl had pulled a gun during the encounter. The U.S. Marshals Service said initial reports indicate the suspect produced a firearm.

According the the New York Times’ report of the shooting, a neighbor confirms that Reinoehl was armed as the FBI and Marshals moved in.

Chad Smith, 29, who lives next door to the apartment where the shooting occurred, said he was standing outside at about 6:45 p.m. when he saw two S.U.V.s race toward the complex. He heard about a minute and a half of gunshots, he said, then saw a man walking backward next to a white pickup truck, holding what appeared to be a gun, and officers firing in his direction.

According to a number of social media posts, Reinoehl associated himself with the violent Antifa mobs that have laid siege to Portland for the last three months. He had been arrested and charged with a number of crimes recently, including illegal possession of a firearm. He was arrested on July 5 for possession of a loaded gun in a public place, interfering with police, and resisting arrest in another Portland “protest,” but charges were dropped.

According to the AP, he was shot in another Portland altercation in late July.

Reinoehl had described himself in a social media post as “100% ANTIFA,” suggested the tactics of counter-protesters amounted to “warfare,” and had been shot at one protest and cited for having a gun at another. …

On July 26, Reinoehl was shot near his elbow after he got involved in a scuffle between an armed white man and a group of young people of color. The man who was carrying the gun, Aaron Scott Collins, told The Oregonian/OregonLive that he and a friend had just left a bar when they saw the group harassing an older Black man. His friend began filming them with a phone, and the group confronted them, calling them Nazis, he said.

Reinoehl later that day spoke to an AP videographer. His arm was wrapped in a bloody bandage; he said he was on his way to meet protest medics so they could change it.

He said he didn’t know what had started the altercation between Collins and the group, but that several people had decided to intervene when they saw Collins fighting with minors.

“As soon as the adults jumped in, he pulled out a gun,” Reinoehl said. “I jumped in there and pulled the gun away from people’s heads, avoided being shot in the stomach and I got shot in the arm.”

Reinoehl also was wanted on a warrant out of Baker County in Eastern Oregon, where court records show he skipped a hearing related to a June case in which he has been charged with driving under the influence of controlled substances, reckless driving, reckless endangerment and unlawful possession of a firearm.

Police said he drove on an interstate at up to 111 mph (179 kph), with his daughter in the car, while racing his 17-year-old son, who was in a different vehicle.

Now Reinoehl has become an official Antifa martyr. The response by the Antifa forces who have been rioting in Portland over the last three months is only likely to escalate as a result of Reinoehl’s death. Will that be enough for Portland’s hapless Mayor Ted Wheeler and Oregon Governor Kate Brown to ask for federal assistance in restoring peace to the City of Roses? Don’t count on it.

Previous article: [VIDEO] Rioter Hit With Molotov Cocktail Meant For Police, Set On Fire, Police Come To His Aid Next article: Armed Resident Shot By His Own Gun After Intruder Wins Battle