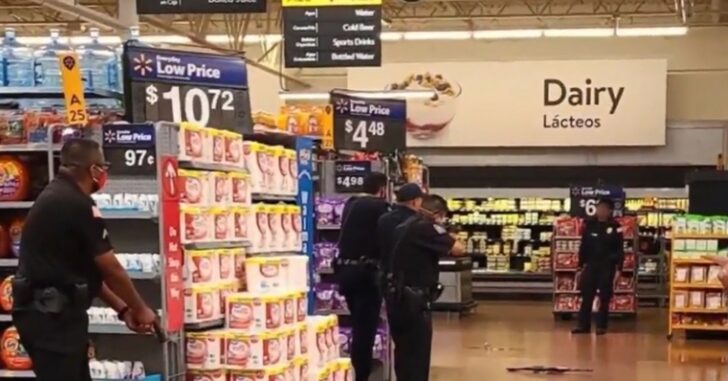 WESLACO, TEXAS — A 25-year-old man reportedly walked into a Walmart dressed in black, and carrying an AK-47 and at least one handgun. A customer and witness confronted the man, and the exchange went as follows:

“I was pulling up and I seen a gentleman, young man approximately 25, mid-to-late twenties, carrying an AK-47 into the store,” said witness John Allen.

“He was very upset that I stopped him, and he was wanting to know who I was, those kinds of things. I said I was just a soldier, and I’m concerned citizen and you’re not shooting anybody in this store today,” said Allen.

The man then reportedly pointed the gun at a customer, but it wasn’t clear if that customer was Allen.

He was wearing some type of uniform, some saying that it resembled a police or military uniform.

When police arrived, the confronted the 25-year-old towards the rear of the store, telling him to drop the gun.

“They gave him orders to throw the gun. He threw the gun on the ground. He refused to show his hands. At some point, he produced a handgun. Officers attempted to resolve the situation through the use of ‘less than lethal.’ The suspect fired at officers and the officers returned fire,” said Police Chief Joel Rivera.

The suspect died at the scene.

According to responding officers, the suspect seemed distraught concerning a medical condition, but did not provide additional details.

This could have been a planned mass shooting, it could have been suicide by cop, or everyone could have this completely wrong. Maybe it was an open carry demonstration. One thing is almost certain; we’ll probably never know.

Confronting someone with a gun, when you have a gut feeling that the person is looking to do harm, is not something for everyone. Allen made that decision to confront the man, and it may have saved lives.

Previous article: Ruger: Made In America With Options To Fit Your Needs Next article: Suspect Identified After Brutal Attack On Motorist During Protest/Riot