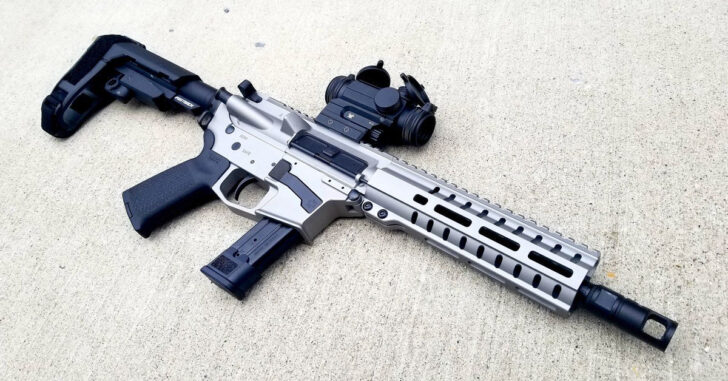 CMMG recently released a new personal defense firearm to the market called the Mk17. It is chambered in 9mm and is available in their Banshee (pistol) series and their Resolute carbine series. The Banshee models offer both 5” and 8” barrel sizes. The Resolute carbine has a 16” barrel. The firearm featured in this review is a CMMG Banshee Mk17 with an 8” barrel.

Pistol caliber defense firearms are nothing new for CMMG. They offer several guns that use Glock magazines. They offer shooters mag compatibility with their Glock handguns. The availability to share magazines with both handguns and personal defense firearms is advantageous. Having a bunch of magazines to suit several firearms makes life simple for many applications. Whether it’s bugout purposes or range fun, shooters enjoy guns that use the same magazines.

CMMG took this concept and expanded their line by using Sig Sauer P320 magazines with their Mk17 line of firearms. The Sig P320 models have exploded in popularity. Sig Sauer offers so many pistols in their P320 line that all share magazine compatibility. Shooters can now use those same magazines in the CMMG Mk17 line of firearms. The Mk17 is shipped with one 21 round Sig P320 magazine. It’s the same mag the Sig Sauer P320 X-Five uses.

I spent a lot of range time with the CMMG Banshee Mk17. It has performed outstanding since day one. I had high expectations because I am very familiar with CMMG pistols. I own a Banshee in 300 AAC BKO and a 5.7x28mm upper that works with the same 300 AAC BKO lower. I cannot begin to explain how exciting it is to swap out the upper to fire 5.7x28mm while using the CMMG 40 round magazines. Now, with the new Banshee Mk17, I can fire 9mm while using the same 15 round magazines from my Sig Sauer P320 X-Compact. Can life get any better than this?

CMMG uses a patent radial delayed blowback system that softens the shot substantially. There is a slight bolt delay once a shot is fired. As the bullet exits the barrel, the bolt is delayed prior to its rearward action creating reduced felt recoil. They also have their own “Rip Brace” system. The Rip Brace allows the shooter to preset their preferred length of pull. With the brace fully collapsed, the shooter can “rip” the brace open to the preset length of pull position. The quick deployment of the Rip Brace is a fast way to comfortably fire the pistol.

The Banshee Mk17 features a “Titanium” cerakote finish. It looks like a deep metal gray. I am told the titanium cerakote finish is one of the most popular cerakote colors that CMMG offers. They have nine cerakote finishes and each has their own personality. My CMMG Banshee in 300 AAC BLK has a “Slate” (cobalt blue) cerakote finish. That one looks amazing as well. I’ve seen just about every cerakote finish CMMG has and I cannot pick a favorite.

I took the CMMG Banshee Mk17 to several ranges and ran many types of 9mm rounds through it. It performed incredibly well. Everything from steel case to brass case, 115 grain to 124 grain, the Mk17 cranked it out. The accuracy and reliability was amazing. I was thoroughly impressed with it’s smooth function and quality craftsmanship.

Check out the attached video to observe the CMMG Banshee Mk17 in action. Let us know your thoughts on the new Mk17 pistol. Would you choose the Banshee with the 5” or 8” barrel? Are you interested in getting your hands on this model?

Previous article: Man 'Not Handling The Pandemic Well' Fires AK-47 At 7 Police Officers Next article: Why We Carry: Felon Shoots And Kills Burger King Employee After Order Takes Too Long In Drive-Thru