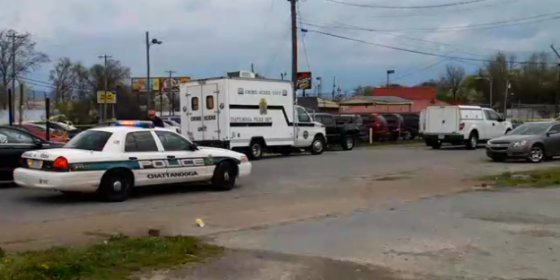 CHATTANOOGA, TENNESSEE — An armed robber found himself the victim after he made a fatal decision: attempting to rob a shop with an armed employee.

Investigators say a man wearing a mask walked into the used car dealer with a gun and told an employee he was being robbed.

“In the process there was gunfire and the suspect has been shot and he’s been taken to Erlanger,” Sgt. Scott Bales with Chattanooga Police Department’s Robbery Unit said.

Police say the employee shot the suspect in the chest. It happened just before two in the afternoon.

News reports do not mention if the employee was carrying his firearm at the time of the incident, but based on a later interview with a passerby, I’ll assume that the employee was indeed carrying.

Channel 3 spoke with William Smartt nearby who believes you’re in the right to carry if you follow the law.

“I’m firmly for the right to carry. If you’ve got a license and you’ve passed the background test and you can get your license, then you have the right to defend yourself and your business and your family,” Smartt said.

He’s familiar with this kind of crime happening in the area after two men tried to rob him in this parking lot. It’s also the reason why he chooses to protect himself.

“I’ve never had to shoot anyone and I thank God for that,” Smartt said.

The armed robber has not yet been identified, pending notification of family, but he died at the hospital from his injuries.

Just last week, I posted an article that asked the question: What would you do if your employer told you that you couldn’t carry on the job? If it’s legal, I’d carry regardless. If it’s not legal, I’d find a new employer.

Previous article: A Friend Gets A Gun As A Gift, But She's Unsafe With It: What Do You Do? Next article: WHAT WOULD YOU DO: Take-down Of Bank Robber After Robbery