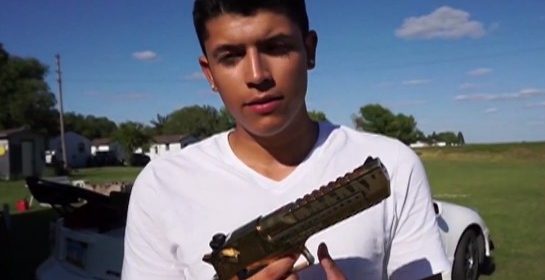 Last June, new up-and-coming YouTuber Pedro Ruiz III was shot and killed by his girlfriend during a ‘stunt’ gone wrong.

Ruiz’s objective: To have his girlfriend fire a Desert Eagle .50 caliber round at a 1.5″ book that he’s standing behind.

I know. Brilliant. Some people will do anything to make a viral video, except this idiotic stunt cost Ruiz his life. It also left behind two children that he had with his girlfriend, one of which she was pregnant with at the time of the shooting.

Watch the video below. The part featuring the fatal shot was not released.

Instead, police offered a transcript of what was said prior to the trigger being pulled.

“Babe, I’m not doing this, I can’t,” Perez said toward the end of the transcript.

“I don’t want to be responsible,” she said.

Shortly after, the transcript said a shot was fired.

You can read the full transcript here.

His girlfriend, Monalisa Perez, pleaded guilty to second-degree manslaughter and was sentenced to 180 days in jail in March.

Prior to the shooting, Ruiz had talked for weeks to try and convince Perez to go ahead with being the trigger girl. She gave in the day of the incident.

It’s a sad thing to have happened, and I’m not quite sure how anyone could ever think that something like this is a good idea.

With that said, I feel that we should be calling for a YouTube ban, since YouTube is responsible for hosting many of these ‘lets get famous by doing crazy stuff’ videos.

That’s a joke, of course, because it’s not YouTube’s fault that people do dumb things. It’s also not the gun’s fault that this kid made his girlfriend shoot him.

Previous article: *WATCH* Colion Noir vs Bill Mahar: They Talk Guns, And You Have To Watch It Next article: "Armed" Robber Waves His Toy Gun Into an Early Grave