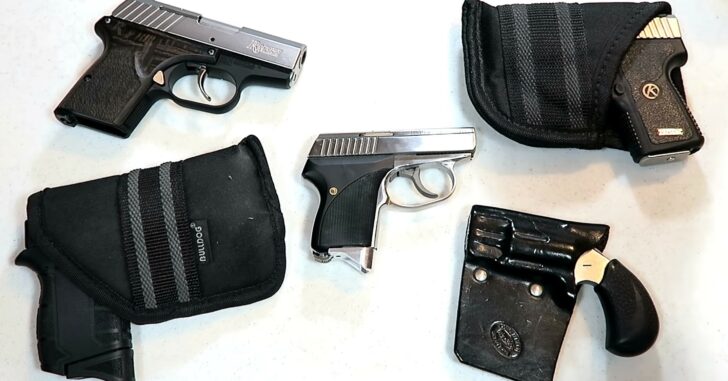 There are several people I know who pocket carry a handgun. To them, the newest holster rig, ankle carry designs or “on the hip” carry position is meaningless. Pocket carriers do not worry about how they will carry their gun based on the weather. Their carry system never changes. They simply drop the pistol in their pocket and carry on throughout their day.

Personally, I think pocket carrying a handgun has many advantages. First off, there is no simpler way to carry a gun. Each pair of pants has a built in holster called a pocket. Secondly, fat people don’t have another object to stuff into their pants creating an even tighter belt with even more belly fat hanging off of it. Thirdly, drawing the gun can be as quick and easy as placing a hand in the pocket. If the carrier feels a bad scenario could occur, they can grasp the grip of the gun while appearing unshakably casual.

One point that I have learned throughout the years is that pocket carriers are as diverse as “on the belt” holster carriers. Each person has their favorite handgun that suits their CCW needs. Some people prefer a micro .380 ACP while others feel confident with a revolver. Their pocket carry handgun decision is primarily based on their style of clothes. Are they into khakis, jeans or cargo pants? Everyone is different.

With this video review, I came up with “10 Amazing “Pocket Carry” Handguns.” I feel handgun featured would suit pocket carry needs quite well. By in large these handguns are sub-compact models although I know some people would have no problem dropping a Glock 19 sized handgun in their pocket. I showcased a good variety of handguns including semi-auto, revolvers and derringers. Most had the weight included because too many ounces could weigh down the pocket and create uncomfortable concealed carry.

Check out the video and let us know which of these handguns (or any others) that you enjoy pocket carrying. Do you feel pocket carry is a good way to go or are you an on the hip holster guy? How about pocket carry as a backup gun?