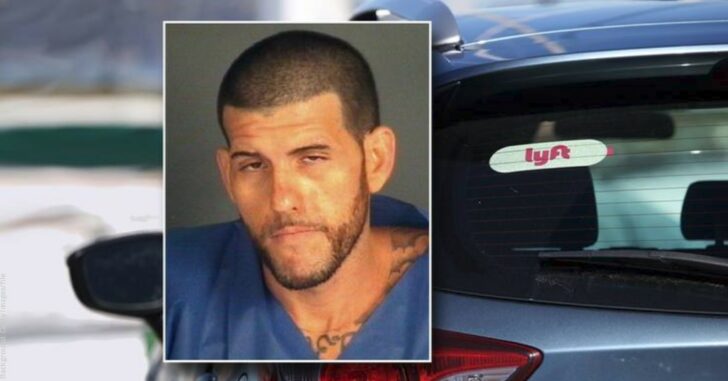 MIDDLEBERG, FLORIDA — A Lyft driver used his firearm as a last resort when a man tried to gain entry into his moving vehicle. The driver was trying to help a dog who looked like it needed help when the chaos began.

The Jacksonville ride-share driver told deputies he had just dropped off a client on County Road 218 about 5:30 a.m. when he spotted a dog next to the road that appeared to need help. The driver said that he was searching on his cellphone for where to take the animal when a man that deputies later identified as Matthew Caudill ran up to the passenger side of his car and started yelling.

The driver told deputies he was scared and started driving off, but Caudill grabbed the partially open window and began running with the car. The Sheriff’s Office report said that as the driver accelerated, Caudill grabbed the rack on top of the car and tried pulling himself onto the roof. At one point, according to the report, Caudill climbed through the window feet first while sitting in the window.

The man then started kicking the driver. That’s when the driver told police he pulled out his gun and shot him in the leg. He eventually fell out of the window and onto the highway.

After he fell, the driver called 911 to report what had happened, and Caudill was taken to the hospital for treatment. Once he was deemed alright, he was arrested on multiple charges.

Ride-share companies, such as Lyft and Uber, have policies that prohibit their drivers from carrying firearms. However, many do not abide by the policy. In fact, we’ve covered numerous stories of these ride-share drivers defending themselves with their firearms. One even stopped a potential mass shooting.

Previous article: [VIDEO] Trump Tweet Shows The Problems With Red Flag Laws After Chris Cuomo Loses It On Camera Next article: [VIDEO] Realizing That A Threat Is Approaching Before It's Too Late