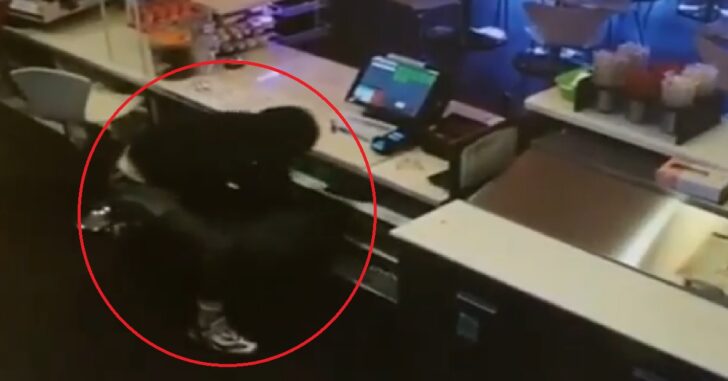 HOUSTON, TX — A store owner was engaged in the fight of his life when his cafe was attacked by a group of three thugs.

Two of the thugs waited in the getaway car while one came in the store, armed, and put a gun up against the owner.

He wasn’t going to take that lying down.

Officials tell Eyewitness News the three men went into the business and tried to rob it. One of the suspects pointed a gun at the clerk’s head and demanded he open the safe. The cafe owner managed to wrestle the gun away from the suspect and fired it inside the store. A bullet shattered the front door of the business. No one was hurt.

The suspects took off, launching a search in a nearby neighborhood, where it was believed they may have escaped to. A Harris County Sheriff’s Office helicopter was spotted over the area and several deputy constable cars were seen on Walters Road earlier during the initial search.

Take a look at the surveillance video in the news coverage below, because it’s got some important information in it. The shots fired take place just after 1:20.

We need to talk about what happened here, because the store owner was in the wrong.

That’s not what happened here. He fired on the man as he disengaged, unarmed, and ran away.

There could have been passersby hit by those rounds, which were again shot by a man firing on a non-threat.

I cant judge the owner — that fight deescalated very quickly. However, you better believe that this store owner could have landed in extremely serious legal trouble.