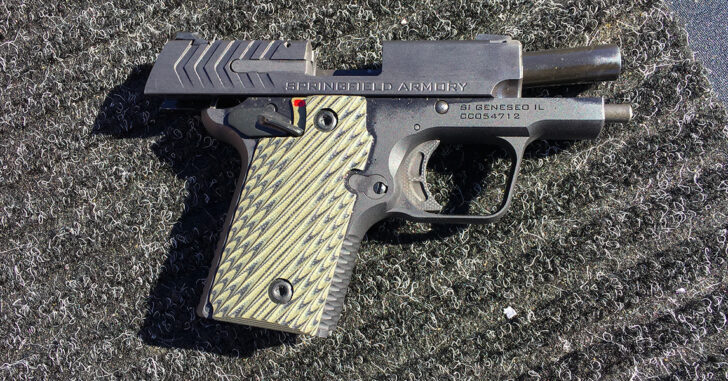 The first reaction by many gun nuts when Springfield Armory announced their new 911 .380 pistol: they copied the SIG P238! And for good reason. The 911 is a dead ringer for SIG’s miniaturized 1911-esque single action micro-compact semi. Springfield made the new 911 available at Range Day and we didn’t miss the opportunity to put some rounds down range. The 911 shot smoothly and accurately with the few rounds we were able to fire at Range Day. Recoil was more than manageable and the slide racks easily.

A couple of features distinguish the 911. First, it’s lighter than its SIG predecessor by about three ounces. That’s at least partly due to the 911’s aluminum frame and Hogue G10 grip panels and trigger. Yes, the 911 has a G10 trigger. The 911 also has a checkered front strap (Springfield calls it their Octo-Grip for some reason) unlike the P238. The 911 also sports ambidextrous safeties. The grips are noticeably aggressive in their texturing, but weren’t uncomfortable to shoot.

Another plus: the Springfield 911’s sights. The pistol comes standard with Ameriglo tritium sights fore and aft. The rear sight is also rackable on a belt, shoe or other hard surface. SIG makes the P238 in 15 different variations of various levels of bling. Springfield’s offering theirs in two models to start; a black Nitride-coated model and another with a stainless slide. Viridian laser-equipped versions will follow soon.

The 911 ships with two magazines, a six-round flush fit and an extended seven-rounder which gives you space for your pinkie (see above).