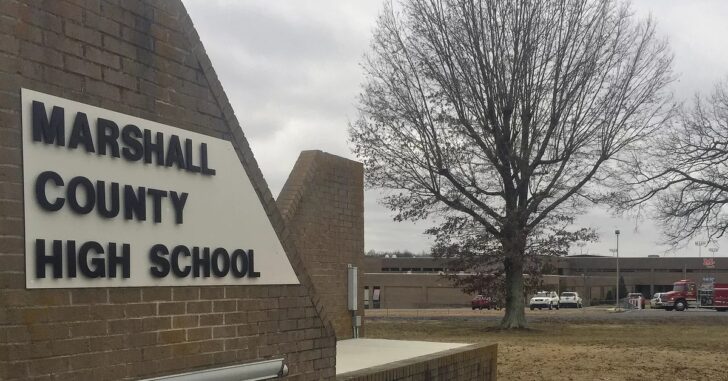 BENTON, KY — A high school in Benton, Kentucky was rocked by a student that decided to attempt a shooting spree at the Marshall County High School early on Tuesday Morning, Fox News reports.

Kentucky State Police Commissioner Richard Sanders stated that the suspected shooter is a 15-year-old male student. He is now in custody, and will be charged with at least two counts of murder and several counts of attempted murder. The arrest reportedly took place without incident.

“He was apprehended by the sheriff’s department here on site, at the school, thankfully before any more lives could be taken,” Kentucky State Police Lt. Michael Webb said during a press conference according to Fox News.

There is currently some question whether or not the teen will be charged as a juvenile or an adult.

Speaking for the dead, it’s hard not to want the maximum penalty against the young murderer.

As Fox News reports, the shooting started as 8 a.m. when the shooter entered the school armed with a handgun. He immediately began to fire. In all, two died and 17 were wounded.

The souls of Marshall County have been bruised and the fabric of the community has been torn, but the people of Benton, KY and the surrounding communities are strong…With faith in God and with reliance on friends and family, we will get through this dark day together…#WeAreKY

Mitch Garland reportedly told The Associated Press he saw 100 children running out of the school and seeking safety after the shots started going off.

“They was running and crying and screaming,” he said according to Fox news.

“They was just kids running down the highway. They were trying to get out of there.”

Our thoughts and prayers are with those devastated by this attack, as well.

This is an ongoing investigation, and I’m certain that we’ll be discussing this at greater lengths later, but for now — it’s paramount that we make sure that our kids can’t get to our firearms. We can’t have any part in tragedies like this.

Lives can very well depend on it.