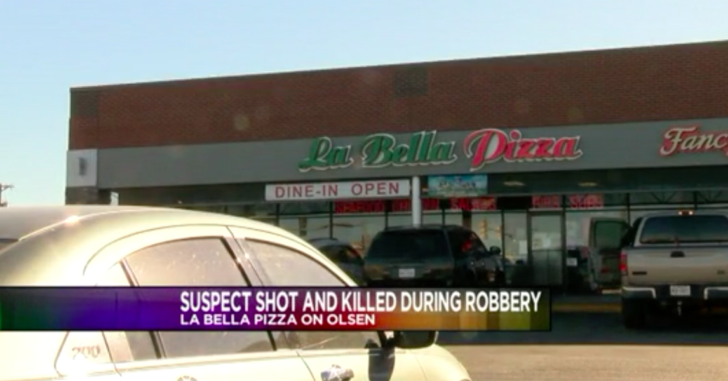 AMARILLO, TEXAS – Last week, a legally armed employee of La Bella Pizza shot and killed a robber who was holding another employee at gunpoint. Clayton Jerrell Morgan — who was 36 and will never see his 37th birthday — was challenged by a La Bella worker who has a concealed carry permit and was packing.

When Morgan pointed his pistol — which was later found to be an air gun — at the armed employee, he shot him. Morgan later died at a local hospital and an accomplice was apprehended and charged with murder under Texas law.

When similar situations have occurred in the past (see here, here and here as examples) the employees of those national chains are invariably fired for violating corporate policies that prohibit carrying a firearm while on the job. No matter how many lives or dollars their actions may have saved.

But the owners of the La Bella Pizza chain, Jim and Cindy Dewitz, want to let the world know that not only will the un-named employee who defended himself and his co-workers be keeping his job, they fully support the people who for La Bella legally and responsibly carrying while at work.

They released the following statement:

We at La Bella Pizza on Olsen are deeply saddened by the incident that occurred last Tuesday, January 9th. Our hearts go out to All the families that are involved during this trying time. Our policy always has and always will be that our employees are welcome to legally and responsibly possess the means to defend themselves and others around them. We have worked diligently to prepare for our inspection so that we can get open again and let our team return to work to support their families. We will be open on the 16th as soon as we pass our inspection and are able to complete our food preparations. To clear up any confusion, La Bella Pizza on Olsen is individually owned and we have no control or affiliation with the other locations other than friendship. We would like to thank our community for the outpouring of support and understanding we have received during this time and look forward to serving you again.

That’s a refreshing departure from the Circle K’s, Waffle Houses and Walgreens of the world. And it just may reflect a growing acceptance of employees responsibly exercising their right to armed self defense. At least in Amarillo.