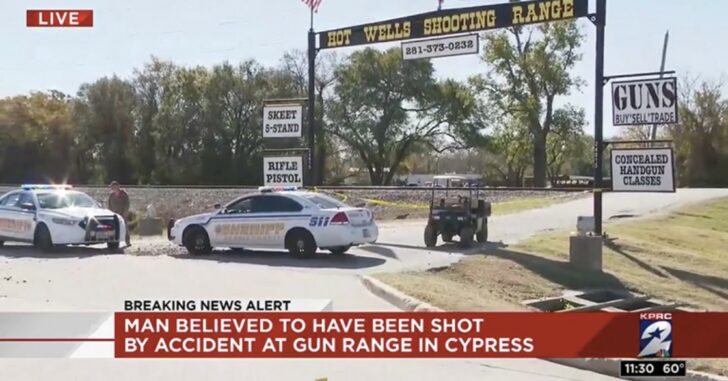 A customer of a Cypress, Texas shooting range was shot and killed this morning when a range employee, who was reportedly working on a hunting rifle, discharged the gun, sending a round through a building wall and striking the unidentified customer as he was walking across the parking lot.

(Harris County Sheriff’s Office spokesman Sr. Deputy Thomas) Gilliland said the single shot hit and killed a 36-year-old customer who had just pulled up at the hunting rangenear the intersection of the Northwest Freeway and Barker Cypress Road. …

An employee at the shooting range told KPRC 2 that the man was hit in the head.

He was rushed to the hospital, where he was pronounced dead.

Anyone see the problem here?

“Homicide will investigate all of the employees, witnesses (and) take control of the weapon. That weapon will be investigated also to find out if there’s anything wrong with it; if there was a malfunction, or if it was human error,” Gilliland said. …

“The main focus will be was it human error, or was it a gun malfunction? We will find out from them,” Gilliland said.

Assuming it all happened as reported, we can save the boys in homicide some time. Because it doesn’t really matter if the gun “malfunctioned.” The problem was the employee was working on a rifle he hadn’t cleared.

The rifle in question may have had a custom trigger some joker had set to a half pound pull weight. Or it could have been a recalled Remington 700 that hadn’t had the factory fix yet. The problem wasn’t that the rifle “just went off,” it was that the range employee was working on a firearm that was loaded. Never mind that it was also pointed in an unsafe direction.

One more time…you have to break at least two of the four rules of firearm safety for something bad to happen. And this morning something unthinkably bad happened when someone ignored those rules.