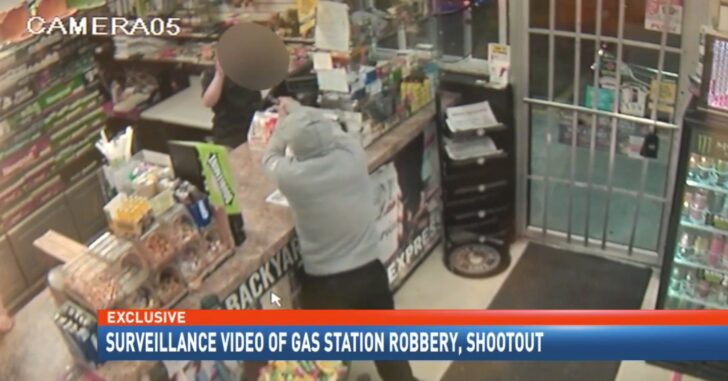 MOBILE, ALABAMA — A teenage girl was in the wrong place at the wrong time, and ended up being shot by one of the clerks who was being held up.

And, as the suspect was fleeing, another armed person inside a vehicle fired at him. That bullet wound up in someone’s living room.

During the robbery, a man with a hoodie demanded cash from the clerk. He started to hand over the money, but another clerk was ready to fight back.

That’s when another clerk grabs a gun and fires a shot at the suspect. Police later arrested and identified the robbery suspect as 26-year-old Joseph Soutullo.

“The second clerk freaked out and felt scared for his life and the other clerk’s life and he pulled the gun. But he hesitated to shoot robber, but when robber turned around he fired a shot but he miss him,” said the store owner.

According to police, the bullet missed Soutullo and struck a 15-year-old girl.

That girl, 15-year-old Savannah Burke, had an overnight visit to the hospital with an abdominal wound. Luckily, she wasn’t severely injured and is able to walk and move around just a day after the incident.

Watch the video of the incident here:

Then, if things weren’t bad enough, an unidentified man is said to have fired at the suspect from his vehicle. Let’s see how this one went:

And as Soutullo was running out of the store, police say a man driving away from the scene took matters into his own hands, grabbed a gun and also fired a shot at the suspect. Only he missed too, and that bullet ended up inside the living room of a home nearby.

“We heard a shatter and gunfire so we got up, walked to the living room and I noticed my door had shattered. And we turned the light on and the TV had a bullet hole in it,” said the homeowner.

While Soutullo is the one responsible for putting all of these folks in this situation to begin with, it’s up to each and every armed individual to make sure, with as much certainty as possible, that they’ve got their target in sight. If you miss that target and hit an innocent bystander or someone’s home, you could be in some trouble yourself.

“Be mindful of the fact that when you fire a weapon, even in say defense of your property, if someone is an innocent bystander you could possibly be charged for reckless behavior in a situation like this,” said Chief [Lawrence] Battiste.

Soutullo was found in a wooded area nearby and was arrested. He is charged with first degree robbery and currently sitting in jail.

Be mindful of your shots, and keep your head straight when in a stressful situation. Things happen in an instant, but try to rid yourself of that tunnel vision.