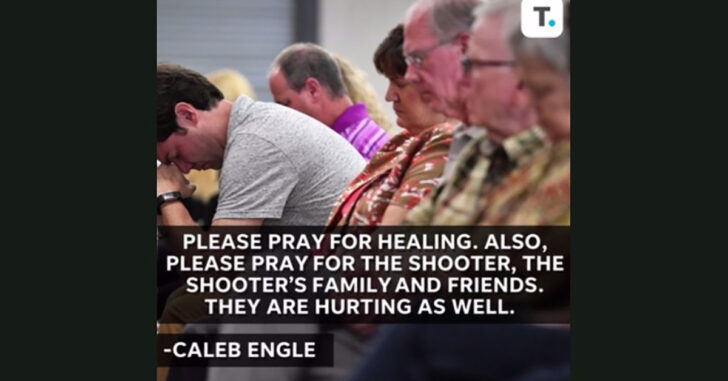 NASHVILLE, TENNESSEE — One person is dead and eight others wounded after a masked gunman stormed into a church and opened fire. The scenario is one that many fear, and is nearly impossible to predict. This incident, however, could have been much worse if it weren’t for a brave –and armed– usher who sprung into action.

The shooter, identified as {REDACTED BY CONCEALED NATION}, a 25-year-old Rutherford County man, accidentally shot himself after he was confronted by an armed member of the congregation. {REDACTED} was treated at an area hospital and was released into police custody, according to Metro Nashville Police.

{REDACTED} will be charged with one count of murder, additional charges will come later, police said. Police say he previously attended the church.

The woman killed has been identified as Melanie Smith, 39. Smith was a mother who lived in Smyrna.

The gunman is believed to have been shooting indiscriminately, and probably wasn’t expecting someone to be armed and ready to fight back.

Police say the gunman wore a neoprene ski mask when he shot and killed Smith in the parking lot of Burnette Chapel Church of Christ, as the service ended shortly after 11 a.m.

With his blue Nissan Xterra still running, the gunman then entered the rear sanctuary doors of the church and began “indiscriminately” shooting, police said.

Not long after the shooting started, an usher by the name of Caleb Engle engaged the gunman and was pistol-whipped as a result. During the engagement, the gunman accidentally shot himself in the chest.

At this point, Engle left the church and b-lined it to his vehicle, where he had a handgun. He grabbed the gun and ran back into the church, holding the gunman at gunpoint until police arrived.

The gunman was taken to the hospital for his injury and ultimately arrested on charges of homicide and attempted homicide.

If Mr. Engle is out there reading this, we thank you for your bravery during this horrible incident and wish your church the best in the days to come. You are a hero, no doubt, and saved countless lives.

Previous article: [VIDEO] Seeing An Armed Thug On Your Surveillance Camera Is A Chilling Thought Next article: Robber Dies After Being Fired Upon By Armed Employee