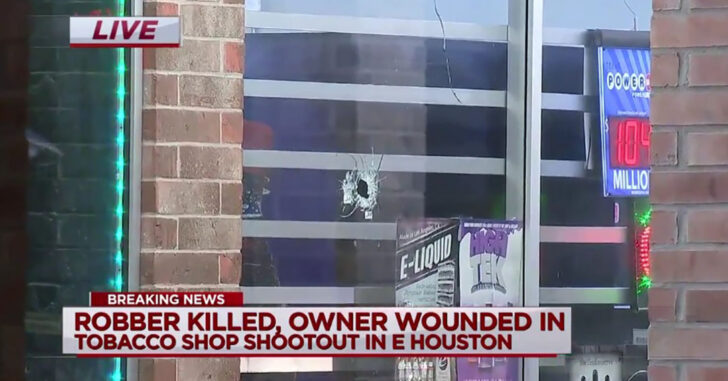 HOUSTON, TEXAS — When a pair of armed robbers tried to knock off a convenience store in Houston, Texas, the store clerk fought back, leaving one suspect dead and another fleeing the scene, reports KRTK.

The two suspects walked into the convenience store and attempted to rob the place, but the clerk wasn’t having it.

A gun fight ensued, and the clerk killed one of his attackers, but not without being injured himself.

Customers inside the store at the time of the shootout called 911, and the dispatcher on the line reportedly could actually hear gunfire in the background.

When authorities arrived on the scene, the clerk was rushed off to the hospital.

He was listed as being in “critical condition” as of March 10, and as he was unnamed in the news story, no update was readily found as to his health.

Although this man was hurt, we commend him for standing up and defending himself. Hopefully, the clerk came out of this OK and the second suspect receives the justice he deserves.

Previous article: In A Shocking Discovery, This "No Firearms" Sign Failed To Prevent A Mass Shooting Over The Weekend Next article: How Many Rounds Do You Need To Fire To Break In Your Handgun?