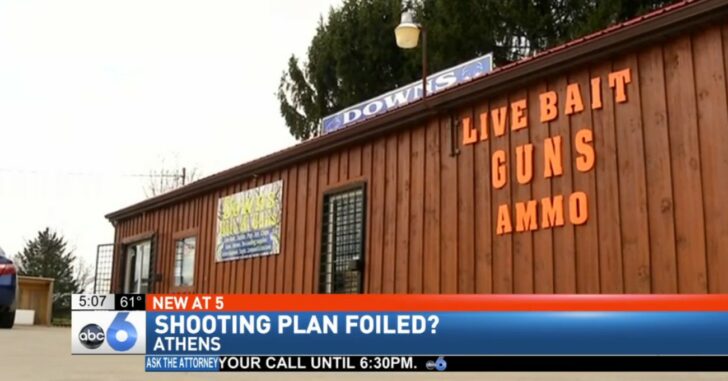 ATHENS, OHIO — A local gun shop owner is being credited by the Hocking County Sheriff for saving lives in what many believe was a thwarted mass shooting attempt.

John Downs, who has owned Downs Bait and Guns for 28 years, said he was working in the store Monday afternoon when a man came in wanting to buy a long gun. Downs said 25-year-old James Howard passed a background check. But he’d asked some questions and made some statements that Downs found suspicious and indicated he may want to harm himself and others.

“There was red flag for me, I am like , I won’t allow that I don’t want that to be on me,” Downs said. So he refused to sell him the gun or any gear.

Downs said that when Howard was leaving the store, he began making threats and swearing. “He started cussing me and this and that, before he left he said you don’t know who I am. I just said, you know what bud, I have a really bad feeling about this, I just can’t sell you the gun.”

When Howard returned to the store a few hours later, that’s when Downs called police. At the time, he had customers in the store and herded them into a back room to make sure everyone was safe, while at the same time locking the door and turning the ‘open’ sign off.

Police tracked down Howard at a local Walmart where he was reportedly purchasing “survival gear and an enormous amount of ammunition.”

Deputies said Howard was purchasing camouflage clothing, gloves, and ammunition when he was arrested without incident at Walmart. They conducted a search warrant on Howard’s car and said they found ” a .22 Caliber rifle, multiple receipts, miscellaneous paperwork involving medical and mental health.” Authorities said Howard had purchased another weapon at an Athens gun store.

After some investigating, it was soon learned that Howard was enrolled at Ohio University, where he withdrew from classes on Monday. Not only that, he is said to have “later shoved a staff member at Bird Arena.” The staff member that Howard shoved is an assistant hockey coach, and Howard used to play hockey at the University.

“I hope he gets the help he needs, apparently he does have something wrong with him and hopefully he gets some help,” said Downs.

Previous article: #DIGTHERIG - Donny and his Options Next article: Caught On Camera: Citizen Holds Suspect At Gunpoint After Attempting To Break Into Church