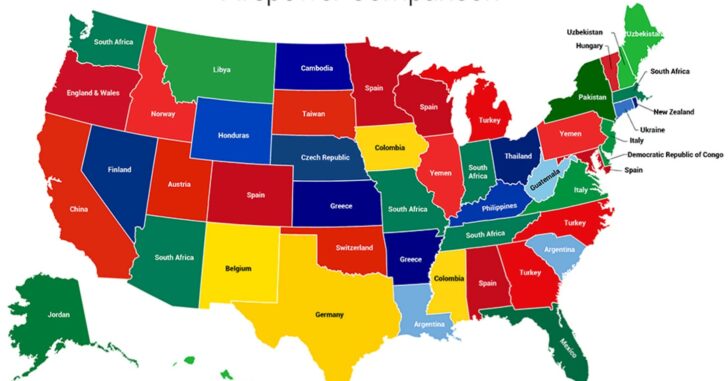 It’s no secret that Americans love their guns, but just how many are in each state? The folks at Movoto.com have done some research and put together a little graphic that shows not only how many guns each state has, but how that number compares to other countries.

Here is how they came to the results in the chart below:

We started with a research group in Switzerland called Small Arms Survey and its report “Small Arms Survey 2007: Guns and the City.” Among other things, it estimated gun-ownership numbers for 178 countries, including the United States (which it estimates has about 270 million guns).

We then took the estimate of 88.8 guns per 100 people for the U.S.—which, seven years later, is likely higher—and used it to calculate each state’s estimated gun ownership, based on state populations from the U.S. Census Bureau’s 2010 survey. (Of course, gun-ownership density varies throughout the country, but this number gave us a easy way to come up with comparable figures for all 50 states, since actual state-to-state numbers were not available.)

Once we had the list of state numbers, we compared each one to Small Arms Survey’s list of countries and respective gun-ownership estimates, logging the nearest match.

Check out their chart below to see the estimated numbers for your state. If you’d like all the details, hit this link.

Previous article: Sheriff On Deadly Home Invasion: If You Break Into Someone's Home, "You Can Expect To Be Shot In Polk County" Next article: Meet The New Walther PPS M2