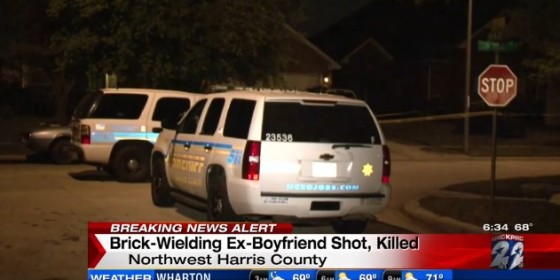 HARRIS COUNTY, TX — A domestic dispute turned deadly after the ex-boyfriend of a woman showed up at her house while her new boyfriend was there.

A woman’s ex-boyfriend was shot to death after he showed up at her house attempting to attack her and her new boyfriend with a brick, according to Harris County Sheriff’s office.

That’s when officers say the woman’s new boyfriend shot the ex with his gun during the confrontation, killing him.

Details are still sketchy as to what actually happened, but homicide detectives are still working the scene. The first big question that I have is whether the threat was outside of the home, or if he entered (or tried to enter) the home. With a self-defense shooting at a residence, this is likely to play a major role in any (potential) charges.

Investigators said they later learned the woman’s new boyfriend heard a noise outside the home and went to find out what was happening. The ex-boyfriend reportedly tried to attack him with a brick. The man fired a gunshot, hitting the ex-boyfriend.

Then, according to khou.com,

Witnesses said the ex attempted to throw a brick at the boyfriend, so the boyfriend pulled out a gun and opened fire.

It’s still too early to tell, but it doesn’t appear that charges are expected against the woman’s boyfriend.