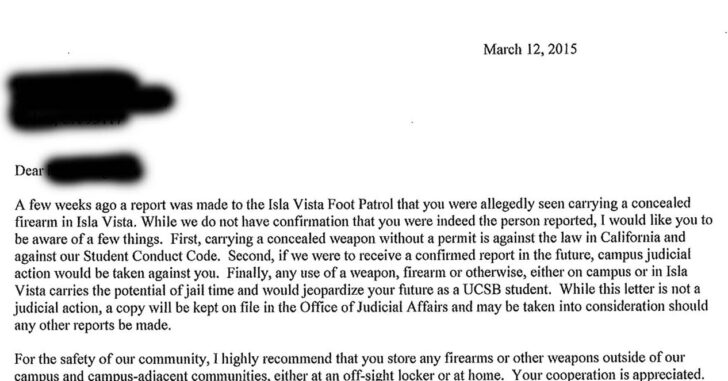 Republished with permission from TheTruthAboutGuns.com

Hello, I am a UCSB student and rather vocally pro gun. I am also an advocate for the ending of police abuse and have had several run-ins with campus police. It started freshmen year when I was flying out of the airport in Santa Barbara and forgot that I had left ammunition in my bag which was doubling as a range bag at the time. Airport security found the ammunition, which I surrendered to them. They alerted UCPD (campus police) . . .

…who then showed up at my dorm room demanding to search it. I refused and they left.

Then, after the killings that happened here last year, the UCPD did a firearms check on me (they can see all the firearms I own because of California’s “universal background check” system) and contacted my parents, telling them I had bought a handgun, shotgun and rifle in the past year.

I thought that was the end of it, but most recently I received the attached letter (above, click to enlarge) from the Assistant Dean of Student Life accusing me of carrying one of my guns around Isla Vista.

Now I am 100% against any laws that restrict citizens’ rights to carry guns in public, but I also have made the decision to not violate the unconstitutional laws that prohibit me from carrying my gun (it’s not worth the jail sentence for me at this time). I do not carry any of my guns around in public at this point.

I understand that the judicial affairs officer is just informing me of the laws in California and potential consequences, but at the end of the letter she advised me to not keep my guns in “campus-adjacent” communities, i.e. my apartment in Isla Vista, a completely lawful place for me to have firearms. She also even admits that they are not sure the report is even about me, yet they sent the letter anyway.

I feel like they are singling me out simply because I am a gun owner and someone might have seen someone carrying a gun that fit my description.

Previous article: Is The Glock Single Stack 9mm Finally On The Way? Next article: [VIDEO] Mean Messages From Anti-Gunners: A Collection Of Hate Mail Sent To Us Over The Years | Warning: Graphic Language