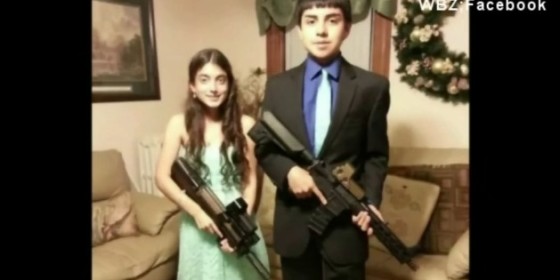 Many high school students look forward to their school’s homecoming weekend. The football game, the dance, and of course, pre-dance pictures are all part of the excitement of the weekend. However, two Massachusetts teens were suspended from school after posting their pre-dance photo on Facebook.

Tito Velez and his date, Jaime Pereira, are members of an Airsoft club and posed in a picture with their Airsoft rifles at home. After a school official saw the photograph on Facebook, he suspended the students for ten days because he claimed that the picture may scare other students. Velez said,

“This isn’t dangerous, you can’t kill someone with it. We didn’t shoot anyone, we were pointing them at the floor. Everything was on safe, no batteries, they never left house. Never, we never took them to school. That’d be stupid.”

Pereira also agrees, saying she believes the punishment was excessive..

“I understand but I think they took this way too far. Suspending us for 10 days and possible expulsion is way too much.”

The caption of the photograph read “Homecoming 2014” which is the reason school officials felt the need to step in, because it was connected to a school-sponsored event. The superintendent said,

“What it’s about is a couple students engaging in an activity that created a total destruction of the school day.”

The kids stated that they never meant to cause any harm, but just wanted to take a picture of their hobby. There are other school districts in the country that have more lenient policies on students taking pictures with with real guns. In fact, there is a district in Nebraska that allows its students to pose with real guns in their senior yearbook pictures. How do you think this compares to students who took pictures with Airsoft guns within their own home?