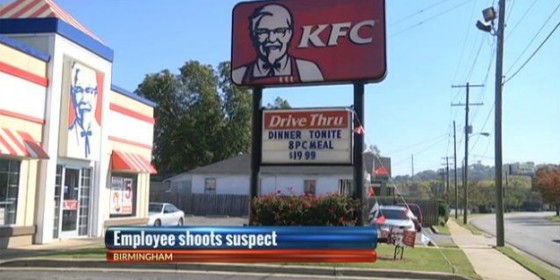 An armed employee was at work this past Sunday at a Birmingham KFC when two armed men stormed in to try and rob the place. At the time of the robbery, there were no customers inside the store. The two robbers likely waited until the place was empty to begin their robbery.

While the armed employee was trying to take cover, he was shot in the leg by one of the armed robbers. It is at this time that the employee drew a firearm of his own and fired back, hitting one robber in the stomach and sent both of them fleeing. The robber hit in the stomach later turned up at a local hospital in search of treatment for his wounds. He was last listed in critical condition and will face charges (if he makes it).

KFC issued the following statement regarding this incident:

“The safety and security of KFC employees and guests is a top priority for both KFC Corporation and our franchisees. The franchise team is working with local law enforcement as this case is under active investigation.”

Birmingham police says that it isn’t clear yet if the armed employee will be facing any charges. The investigation is ongoing, and investigators say that a lot of questions remain unanswered.

We aren’t quite sure why the employee would face any charges, unless of course the firearm he used to shoot the robber was not legally owned by him.

Hopefully, the armed employee was in legal possession of his firearm. If so, we’ll be keeping tabs to see what KFC decides to do as far as his employment, if anything.

Previous article: The Determined Find A Way: Another Beheading, This Time In New York Next article: Moms Demand Action Literally Chases Down Kroger Execs At Their Annual Meeting