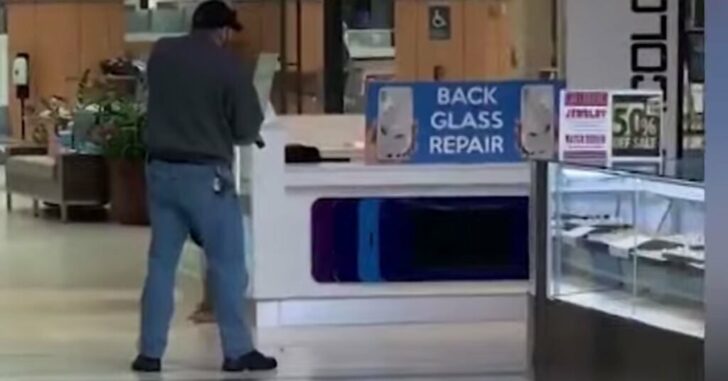 For a concealed carrier, this is as real as it gets. We reported on an incident the other day which saw multiple gunshots fired inside a Pennsylvania mall, and the 16-year-old gunman was shot by a nearby concealed carrier. What we are seeing today is courtesy of USA Carry’s findings, which include a video showing the concealed carrier holding the suspect at gunpoint, and what happens when he comes into contact with a plainclothes police officer.

Watch the video below, then keep scrolling down for more.

This is a rare sight that we see captured on camera, and shows quick judgement and caution by both the concealed carrier and the officer who is approaching the scene.

Watch how the officer approaches, and how he scans the people in the area to determine who is a threat, who isn’t, and what’s going on in front of him. He realizes that the man with the gun is a good guy, who is holding the suspect at gunpoint. He approaches the concealed carrier, tells him to holster his firearm, and the rest is history.

It’s tough to make out what is said between the two, if anything, but it’s important as an armed citizen to understand who is around you if you ever have your gun out. If you are mistaken for the bad guy and don’t see an officer approaching, for example, things could get hairy in a hurry.

This example turned out pretty well, and it seems that both men handled things properly. The video is worth a few watches, paying attention to body movements and what is really going on. Put yourself in both of their shoes and think about how you’d react and what you would do if in a similar situation.

Previous article: Woman Blindly Fires At Suspects Who Took Off With $4,000 Puppies - WATCH Next article: Teen Shot And Killed After Pointing Rifle At Cars And Police, Turned Out To Be Airsoft Rifle