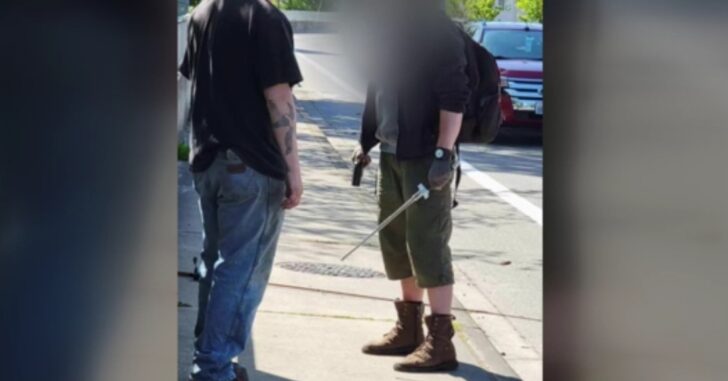 EVERETT, WASHINGTON – A man was fatally shot after becoming aggressive toward other citizens and physically assaulting several men who attempted to intervene.  Police say the events unfolded around 3:30 p.m. Saturday on the sidewalk around Silver Lake.

The man had been walking his dog when, with no apparent provocation, he began “yelling and became aggressive towards people walking on the sidewalk around Silver Lake,” including a grandmother and her young granddaughter, according to police on Wednesday. Witnesses say that he had been chasing families and threatening them with weapons.

When several men attempted to intervene, the man responded by pepper-spraying and striking them with a metal baton. One of the men who tried to intervene was armed with a pistol, and shot the man twice, according to police spokesman Aaron Snell.

The man with gunshot wounds was transported to a nearby hospital, where he later died.  Everett Animal Control took custody of the deceased man’s dog.  The shooting victim’s identity, as well as cause and manner of death, will be released by the Snohomish County Medical Examiner’s Office.

Police say that the shooter and several witnesses willingly granted interviews to detectives. It was not immediately known if the man responsible for the shooting had a permit for the gun, or if he will be facing any possible charges for the fatal shooting.

Washington state law allows a person to use reasonable force to defend themselves or others when they are being attacked or have a reasonable belief that they are about to be attacked. There is no duty to retreat imposed on the individual before using an amount of force reasonable to prevent or stop the attack.

Previous article: The Case for Home Defense Guns with "High-Capacity" Magazines Next article: Armed Man Shot By Ex-Girlfriends Father After Breaking Into Their Home