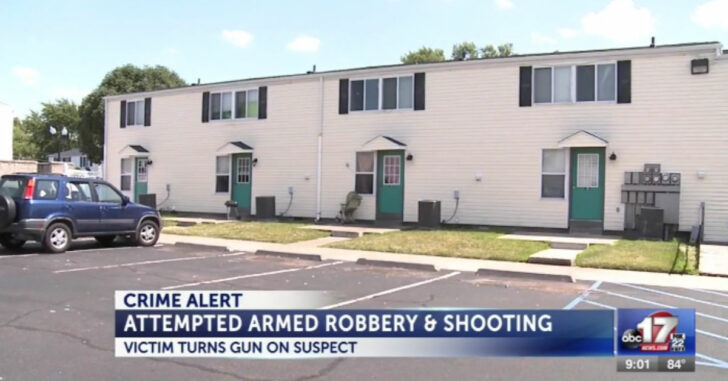 COLUMBIA, MO — One armed robbery suspect ended up losing his chance at easy money and entered the fight of his life when the man he chose to rob was a concealed carrier.

Police report that they received calls of people hearing gunshots at about 11:30 p.m. July 8, according to KMIZ.

When they came to investigate, they found a 27-year-old male victim who claimed that he had been approached by a man, armed with a handgun, completely dressed in black.

The robber demanded the victim’s money. The victim responded by producing his own handgun and opening fire.

The robber ran for it.

No injuries were reported, although there was one car that was reportedly damaged by a bullet fired by the victim in self-defense.

The thug was still on the run as of the latest report by KMIZ.

This brings up an interesting point that is often discussed, but not as commonly observed.

I have not been in an altercation wherein I was forced to open fire an another person. At least not yet, and I pray that streak continues.

I have, however, been in a situation where I was forced to draw on an animal threat — a very different situation, but even that is enough to get the heart pumping and make folks shaky.

It’s a reminder to all of us — don’t shoot until you know what you’re going to hit, and try to keep it cool. Staying cool and maintaining good judgment coupled with accurate shooting is the best way to navigated a deadly situation.

How do you give yourself the best odds?

Previous article: #DIGTHERIG - Mat and his Glock 43 in a StealthGearUSA Holster Next article: Armatix IP1 'Smart Gun' Can Be Hacked By Magnets, Rendering It a 'Stupid Gun'