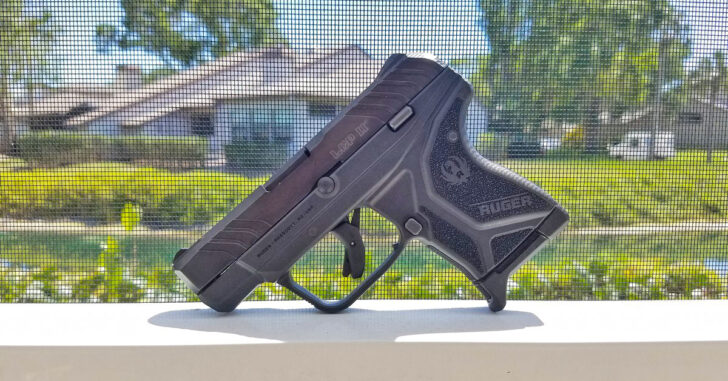 The first rendition of the Ruger LCP was… not my favorite. In all honesty, I disliked it immensely. It felt like a toy. When I gripped it, the only thing I could think about was the feeling that it was about to break.

That’s why I was excited to see the Ruger LCP II unleashed. When it arrived, I was immediately pleased with what I was looking at, and it continued to surprise me. In a well-thought-out execution of a, in my opinion, bad first run (the original LCP), Ruger did an exceptional job at making the LCP leaps and bounds better.

In a new world of smaller and smaller pocket pistols, the Ruger LCP II is a fine choice for just that. Getting a nearly complete overhaul in design, their R&D department hit it out of the park. The grip of the firearm is a huge improvement over the original design and is highly welcomed. It feels much better in the hand. While the size is pretty much the same, the improvements do not go unnoticed. Simply, it feels more comfortable and durable.

The slide locking back when it should was a big thing for me. The original LCP had some problems with this, and it seems to be corrected with the latest version. Sticking with the topic of the slide, it’s also much easier to pull back than the original. It’s smoother and less tense, making for easy chambering. One setback for me are the sights. Still. They’re small and just not for me. While they don’t leave much for clothing and such to get snagged on, they don’t serve a great purpose in my eyes (pun intended). However being a firearm for close encounters, are you really going to be looking at the sights anyway? Debate. The trigger comes with a trigger safety that we’re probably all familiar with. In short, it needs to be depressed alongside the actual trigger in order for the firearm to fire. The trigger pull, break and reset are all much better than the original. The pull is smooth and the break is crisp. The pull totals .75 inches while the break stands at .5 inches.

The trigger guard has also been improved, allowing for more finger room. This, however, will not allow certain accessories for the original LCP to be used on the II, such as a laser that wraps around the guard. So, if you’re in this boat, you’ll have to get another laser to fit. The magazine holds the same 6 rounds, and of course one in the chamber. That’s expected from a firearm so tiny, but that’s what extra magazines are for. As a side note, the magazines of the LCP and LCP II are not interchangeable. While some have had success using an LCP II magazine in the original LCP, it’s not recommended. If you find yourself owning both versions, it’s best to maintain magazine separation.

Let’s talk recoil, and I hope I’m not alone with this feeling. The LCP II seems to have more recoil than the original, but it could just be in my head. But don’t get me wrong, because it’s still extremely manageable and fun to shoot for a super compact .380 pistol.

Overall, Ruger did a fantastic job with the redesign of a very popular concealed carry pistol. They listened to customers to help make adjustments, and the results are better than I had expected. At a suggested retail price of $349, it’s worth taking this firearm for a spin to see if it’ll make it’s way into your collection.