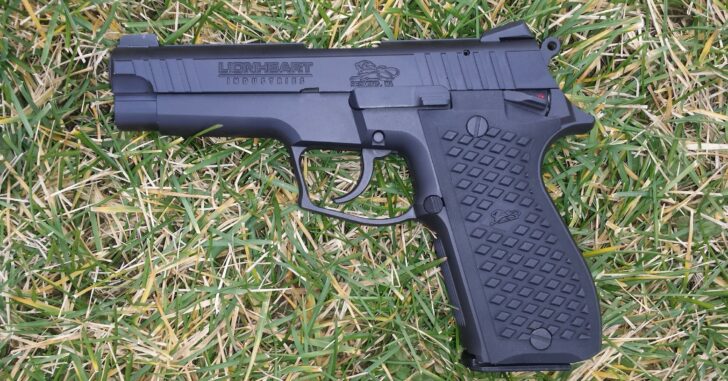 A while back I saw a Lionheart LH9 on one of my favorite online sites and immediately thought what a good looking gun they produced. Beautiful lines, alloy frame, cerakote color choices, aggressive grips along with various sight options prompted me to look deeper into this pistol. I checked out their website to look at the different models offered and each of their three choices seemed to have a different personality which intrigued my interest further. Next was the video and written reviews. Not surprising, the LH9 received high praises from the reviewers. I especially noticed the smooth shooting with very little muzzle rise. Just about every reviewer commented about how much they liked the trigger action along with the superior accuracy. Ok, deal on, I had to get the Lionheart LH9 in my hands.

I decided on the LH9 with the 4.1 inch barrel that Lionheart calls their “full size” model. I picked it up from my FFL and he was very impressed with the quality of the pistol. He said it was a cross between a Browning Hi Power’s upper slide and a Beretta M9 lower frame with a visible trigger transfer bar. Those two guns are among his favorites so he instantly became a Lionheart fan. Coming from a guy who transfers guns all day long, he didn’t want to give up the LH9.

I checked gunbroker to get a feel for how much the LH9 sells for. On average, the lower to mid $600’s will get you this Lionheart LH9 which I find to be a good deal considering what is included. Lionheart pistols ship with a heavy duty cordura field case that includes everything needed to hit the range. The field case includes, cleaning rods, a brass bore brush, a slide and frame brush, a small tube of froglube, a lock, paperwork, a velcro patch to identify the case and a padded pocket to transport the pistol. The LH9 itself was quite impressive. The overall look and feel of the gun had quality written all over it. The alloy frame that I chose was cerakoted black however other color choices are available. The cerakote finish allows for quick and easy cleaning along with a beautiful look to the pistol. The grips are polymer diamond checkered that are quite aggressive yet comfortable for a firm hold. The serrated magazine release button is located next to the trigger guard to deliver a strong deployment of the 13 round magazine. The mag is built tough with a strong spring to feed the rounds. The base plate fits flush to the bottom of the grip with a slight lip in front to manually remove the magazine if needed. The LH9 has an ambidextrous thumb safety that does not interfere when shooting however it is positioned to quickly sweep down with the thumb to disengage. It also allows the option to carry this pistol “cocked and locked” if that is the shooter’s choice. The trigger on the LH9 is very well made. The double action pull is smooth and the single action pull is light and quick. The single action trigger reset is as short as the famous Sig Sauer SRT (short reset trigger). Lionheart has a double action feature they refer to as, “Double Action Plus.” Double Action Plus allows the shooter to manually move the single action trigger position to a light double action trigger pull by pushing the hammer to rest position. In this position, The shooter’s first shot will be a lighter double action pull similar to the popular HK LEM trigger. Carrying the LH9 while utilizing the Double Action Plus would be advantageous for the shooter to perform light trigger pulls in both double and single action. As mentioned, Lionheart uses metal Genuine Novak Sights that compliment the pistol well. The LH9 can also be ordered with tritium night sights or fiber optic sights. The slide has deep cut serrations in both the rear and front for those those who use press checks. The top of the slide is slightly textured from the rear sight to the front sight, which is consistently found on several CZ pistols, to avoid glare from the sun. The 4.1 inch chromed barrel looks beautiful with the black slide but more importantly it has locking lugs to hug the interior slide to lock the barrel into position allowing little to zero play when shooting resulting in amazing accuracy.

To disassemble the Lionheart LH9 is a simple process that requires no tools. Once assuring the gun is unloaded with the magazine removed, observe a slight cut out in the middle of the slide. Pull the slide back to align the front of the slide stop pin with the cut out. While holding this position, push the slide stop button from the right side of the gun and pull it out from the left side. At this point, slide the upper off of the frame without the need to pull the trigger. Simply remove the uncaptured recoil spring/metal guide rod and the 4.1 inch barrel to complete the process. To reassemble, simply perform the same steps in reverse order. Shooting the Lionheart LH9 met all of my expectations and then some. It felt comfortable right out of the box and pointed and shot well. The accuracy was just as I had hoped by tagging my ten inch iron target with ease from 12 yards. The “Double Action Plus” is a nice carry feature but it didn’t impact my range time. However, the single action trigger was quick which made for exceptionally fast double taps. Overall, the Lionheart LH9
is a beautiful handgun that performs excellent. As previously mentioned, it has quality written all over it. As for the Lionheart Industries, they have big plans for the future. They have already begun to make 15 round magazines for the LH9. More excitingly, they will be releasing a new model in 2017 that will have additional features while including the same exceptional quality. Without divulging too much information before it’s release, let’s just say I will be waiting in line to get my hands on the new Lionheart model.

Previous article: Ex-Boyfriend Suffers Actual Heartbreak After He Breaks Into Ex-Girlfriend's Home Next article: Washington State Lawmakers Want To Make It A Crime If A Gun Owner's Stolen Gun Is Used In A Crime