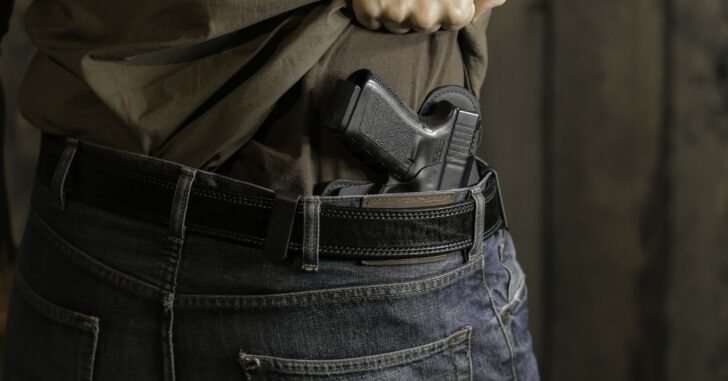 Most individuals who take their own self-defense seriously should be well aware of the somewhat broad topic of situational awareness. Certainly the principle of maintaining awareness of one’s surroundings is an old one, but like so many things related to self-defense Jeff Cooper did wonders for this concept and the ability to teach it to others. Cooper urged all of his disciples to maintain a condition of relaxed-awareness, which he referred to as condition yellow on his now-famous color code awareness scale. Situational awareness is one element of defensive mindset that is of the utmost importance for anyone who chooses to be prepared for the evils this world contains, but there is a great deal of misunderstanding regarding the topic.

I encourage students of self-defense to practice what I refer to as “proactive” situational awareness. This approach suggests a level of action on the individual’s part beyond simply remaining alert to your surroundings. As armed citizens, or even unarmed citizens that seek to further our own safety, we want to be aware of the things that surround us in the world. Look at the masses of humanity that we live among on a daily basis. The people in the streets, in the shopping malls, in public places, in your place of work, the majority of these people have no clue as to what is really happening around them. These folks inhabit “condition white,” the mental state of complete lack of awareness as Jeff Cooper so warned us against. The modern example that typifies condition white is the individual who walks right through a door into a new environment while staring at the screen of his phone or some other electronic device. If you are concerned with your own safety, don’t be that guy.

We typically consider situational awareness a state of being observant to what is transpiring in our general vicinity. This, of course, is a big part of it. When we are in a public place we want to know what is happening around us, and always conscious of what is behind us, the general direction that we cannot easily observe. We should be primarily looking for anomalies in the environment. If we are surrounded by many people in a public place, we want to be alert to anyone who appears out of the norm. Learning to trust our instincts regarding individuals is a good thing, as often our sub-conscious mind knows something is wrong when even our conscious mind tells us that we are just being paranoid. Being aware of anything that is potentially dangerous, as well as being aware of that danger‘s proximity to our own location, is what we should strive for. However, simply observing is not necessarily enough.

The concept of “proactive” situational awareness that I propose is the active investigation into one’s surroundings at the outset of inhabiting a space. Simply watching what happens around you is a good thing, but more may be required if you wish to avoid being in a bad place at a bad time. A proactive approach to awareness involves specifically reading the environment of a space and determining if you should even be there in the first place, and if you have to be, identifying what can go wrong right from the outset. Let me explain further:

It is a somewhat common image projected onto serious gun people that they like to “sit with their back to the wall.” This, of course, can be greatly embellished like any other stereotype. But essentially we should all admit that positioning ourselves in a place that grants us a visual of the environment and also minimizes our vulnerable back, where we do not have eyes, is a good thing. The problem is, even just walking into a public place and going immediately to a location where you can sit with your back against the wall is hardly enough if that is the extent of what you do. A proactive approach to situational awareness would begin as soon as we enter a new environment; let’s say a restaurant, for the sake of this example. If we walk into a restaurant and go straight to the table in the back of the room and sit with our back to the wall like we are Wyatt Earp, does that do us much good if we ignore the fact that there is an armed robbery already in progress when we walked in? Obviously not.

Realistically most would probably not miss the robbery in progress, although it has certainly happened, but the point is that our situational awareness should begin at the very moment that we are entering, perhaps even before we enter, a new space. When we walk through a threshold into a new environment we should proactively scan and see several different elements in that space. I suggest looking for these four criteria: First, who is there and what are they doing? Second, where are the entries and exits in the room? Third, what is the most likely target area for trouble in the space (hint: probably the location of the cash registers) and fourth, what in the space could serve as cover or concealment if things go bad in a big way? Now, I am sure there are many who will read what I just suggested and label me as paranoid and declare their refusal to live in such a manner. Sure, your choice. But this whole process takes about three seconds and goes unnoticed by anyone else. I consider pre-emptive preparation a relief from anxiety, not the cause of it.

When we scan a room to observe individuals that are already there, what should we be looking for? There are too many possibilities to even begin to list, but there is one essential element that covers it all: we want to look for anything that is unusual within the context of the current environment. Sticking with our restaurant example, if we scan the room what should we typically see? Obviously, people sitting and eating, or perhaps people sitting and conversing. We know what normal behavior should look like within this context because we have witnessed it so many times and we are also, at least sub-consciously, aware of what would be abnormal behavior for such a setting. A person seated alone will probably be either eating or doing some other activity. If the lone individual at a table is not eating, what would constitute normal behavior? Probably reading, or on an electronic device. If not, there might be something unusual happening. Is the person sitting quite relaxed, perhaps just waiting for their food to come out, or do they seem very observant, nervous, or tense? That might be a clue.

Groups of people sitting together in a restaurant are also going to fit into a predictable pattern of behavior. Groups of people typically talk to each other. Perhaps a couple of individuals are sitting without conversation, but reading or looking at their phones. However, a group of men sitting and not talking, while appearing unusually observant or nervous, is possibly an indication that there is something unusual going on. The bottom line is this: you have been in similar environments, probably hundreds of times in your lifetime, and you can generally identify what is normal and what is abnormal within such an environment. When something does not seem right, you might be right. As humans we live in constant denial about many things, one of which is our own safety. It is easy to say to ourselves, “it won’t happen to me, it won’t happen here.” This, of course, could prove to be the last thought to ever cross our earthly mind. If something does not feel right, there may be more to it than simply being “paranoid” and typically acting on your instinct is the best thing to do. What is wrong with simply walking right back out the door from which you came and eating at a different restaurant? This is an option when we exercise proactive situational awareness. I am not suggesting here that you be scared of your own shadow and never go to a restaurant, I am suggesting that you be cognizant of a situation that truly raises your suspicion and taking preemptive action.

Another example, let’s say you need to use an ATM machine late at night. The ATM machine sits in an isolated location directly adjacent to a proverbial dark ally. Is the best time to be aware of a criminal intent on holding you up at the ATM machine when he is already directly behind you? Rather, proactive situational awareness would involve knowing what is in the environment surrounding the potentially dangerous zone. A dark corner or ally next to the machine? Light it up with your Hi-lumen handheld light before using the machine. You do always carry a good light don’t you? If not, this is a far more likely use for it than actually using it in conjunction with a handgun for a defensive shooting. If there is a criminal of opportunity lurking there, what do you suppose has just happened to the predator/prey relationship when you actively light him up with a hi-powered light? You now know that he is there, and he knows that you know he is there. His element of surprise is gone and you are now a hard target rather than an easy mark, hopefully avoiding a violent encounter before it even transpires.

Let’s say you are a woman leaving the office late and you approach your vehicle in the parking garage only to notice that there is another vehicle in close proximity to your own, in an otherwise vacant lot. Giving the unknown vehicle a wide birth to provide some reaction time, walk past it and scope it out before you stand with your back to it while getting into your own vehicle. If you have a bad feeling about it, listen to your instincts and avoid the situation entirely. Feel free to go right back into the office and call for help or enlist an escort to your vehicle. Might you feel silly for taking such precautions? Sure. But you may feel quite silly when you ignore your instincts and get dragged into a vehicle by an assailant who quickly emerges when you are vulnerable.

Situational awareness should not simply be reactive, but proactive, as is illustrated with the examples provided here. Just as you proactively seek to ensure your own security in a financial manner, or as it may pertain to minimizing other hazards such as accidents or fire, so should you proactively seek to secure yourself and those that you love from the criminal element, even if it is inconvenient sometimes. Seek out the surprises before they surprise you and control your space, and feel free to simply walk away from a potentially bad situation if you think you should.

Previous article: [BREAKING] GA Senate Passes Campus Carry Bill, Expected To Be Signed Into Law By Governor Next article: Can You Spot What's Out Of Place In This Photo?