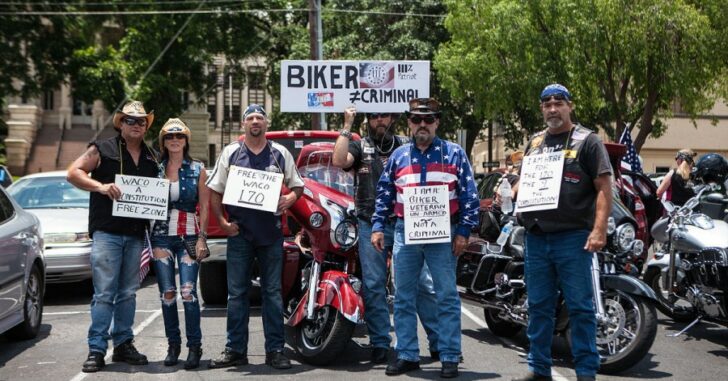 The relationship between the police and motorcycle clubs isn’t exactly cordial. We’ve seen what can result from that tension in Waco recently, and the justice system is still trying to figure out what the heck happened. Things aren’t a whole lot better in the Empire State. That’s where the Pagans Motorcycle Club of Suffolk County, Long Island operates. People who want to own a handgun in the state of New York are required to have a permit to purchase and possess the gun (one permit for each specific firearm) and as a result the police know exactly who has (legally owned) heaters. According to reports, that enabled local Suffolk County cops to confiscate the firearms of one motorcycle club member without any apparent legal justification . . .

On Thursday October 22nd, the SCPD contacted a member of the Pagans MC and informed him that his legal permit issued by Suffolk County was under review because of his alleged membership in the Pagans MC. The SCPD requested that he come down to the station for an interview and bring all 10 of his legally purchased and registered handguns.

The member, in good faith, says he went down to the station with his legal handguns in order to be interviewed. This member has absolutely no criminal record and he had been legally issued a permit. He thought he could clear it up, he says.

But the SCPD had no intention of making an evaluation based on the interview. It is clear that the decision to confiscate this man’s legal handguns was made before he ever arrived. The member was given no real choice. He was told he could give up being a Pagan and keep his permit and guns. Police told him that it is illegal to own a gun in New York as a member of an outlaw motorcycle club like the Pagans. Police said there was recent Supreme Court precedent that confirmed the law.

The idea that someone could have their constitutionally protected right to keep and bear arms violated due to his association with a certain group the police deem “unsavory” is more than a little unsettling. I’m sure that no one would argue that getting guns out of the hands of members of a street gang such as the Bloods would be a good idea. But when that definition begins to expand to include groups that the cops simply don’t like, well, you can see where this might be heading.

If the cops suddenly consider the NRA a terrorist organization (as the NY Daily News desperately wants) then under this same logic they could begin confiscating the firearms of every NRA member in their jurisdiction. Where does it stop?

Previous article: Trump To Possibly Change Gun Free Zone Policies At His Properties Next article: I Drew My Gun On A Politician The Other Day At My House